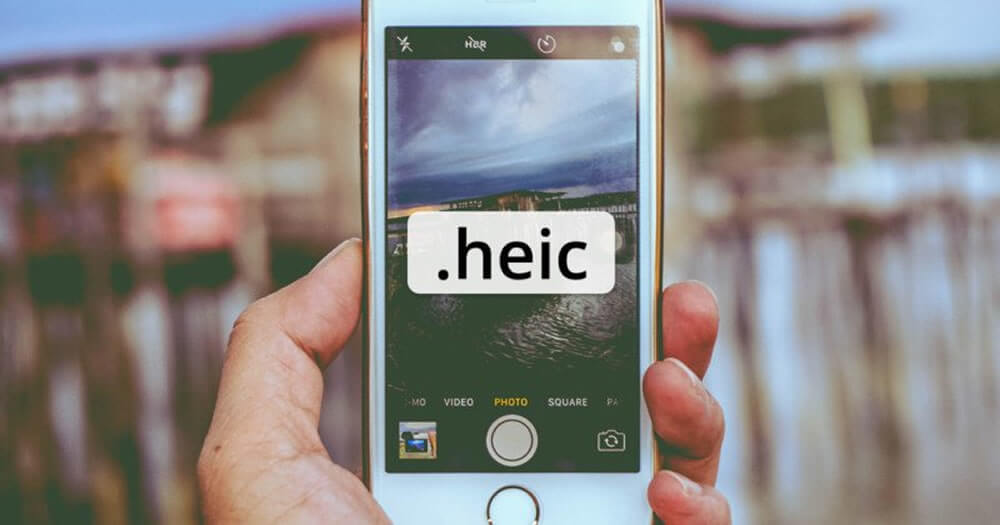 Editor’s Note: This article was originally published in November 2018 and was revamped and updated in March 2021 for freshness, accuracy, and comprehensiveness.

The HEIC format from Apple has been one of the biggest game-changers in the social media space, and it helps you save more than 50% amount of data storage. However, it has been challenging for most people to adopt it straight away and require a third-party app to manage it. As we’re Apple fanboys, we have tried various HEIC to JPG converters to provide you with the best option out on the internet.

Therefore, it is key to determine the best converter for you and save you from the hustle. We have decided to get you a list of some of the best HEIC Converters that could solve all your issues. Before that, let’s get to know some basics to have an easier time understanding all the processes.

What is HEIC? Is it better than JPG?

Introduced in 2015, HEIC/HEIF was developed by Moving Picture Experts Group (MPEG) and is an extension of HEIF (High-Efficiency Image Format), which is a container format for images. The standard covers most multimedia files such as audio and video and also supports animation. This can amount to better and more efficient photos in the long run.

HEIC bring some real advantages to the table, that being:

However, the lack of compatibility across legacy devices makes HEIC only available to a niche which can be troublesome. Though taking everything into account, we could sufficiently say that HEIC is better and more efficient at storing data than JPGs.

What are HEIC converters used for?

HEIC Converters help you convert the HEIF Photos to other standard formats such as JPEG or PNG. These applications can be free or require a fee for the service. However, paying for the application may not be beneficial or practical since you may only need to convert a few photos. Now the question becomes, which are the best free HEIC Converter on the internet?

Below is a list providing you with some of the best HEIC Converters that will let you convert various HEIC images to JPG for free.

If you require transferring and managing a handful of HEIC photos on your Mac, don’t worry, as we have the perfect solution for you. These few apps can view HEIC files, and if the app you want doesn’t want to consider them, you could also convert them to JPG for better compatibility.

Many apps like Preview, Photos, and iMovie are all able to view HEIC formats. However, other apps like Photoshop will open HEIC files on Mac only and not on Windows. However, they can overcome this issue by simply converting the file to JPG. So, how would you go on converting the HEIC images through Photos or Preview?

One of the easiest ways to convert a HEIC to a JPG on Mac is through the “Preview” and “Photos” app. The process is simple and could be done following the steps below:

iMazing HEIC Converter is built for doing one thing and one thing only, and that is converting HEIC images to JPG, and it does it well. We never experienced any issue with converting any image, and it worked flawlessly for batch conversions. It works with a drag and drop function, which requires you to select all your files and drop them in the box for conversion. 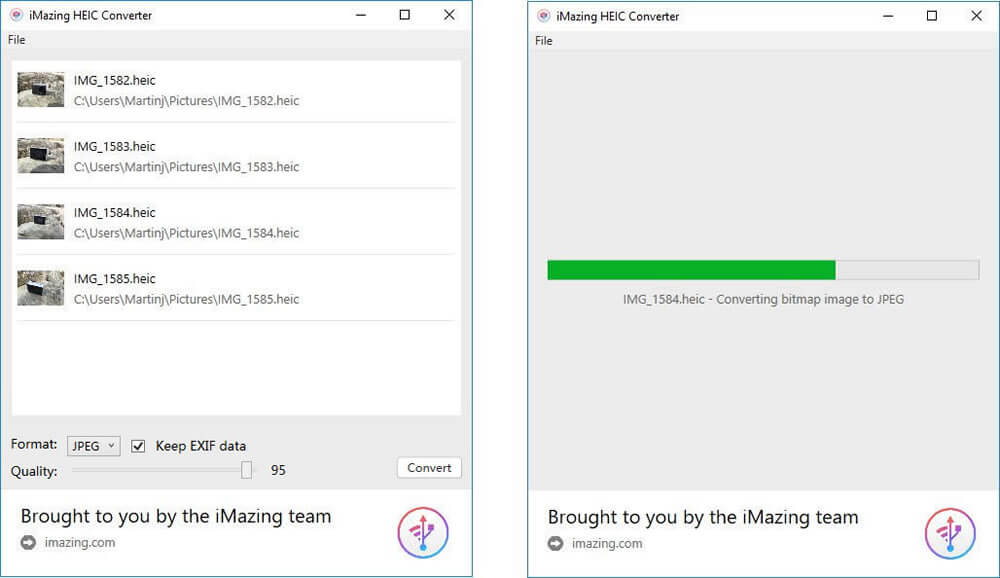 We enjoyed using iMazing to converting HEIC photos as it instantly recognized all files without any errors. The process worked flawlessly as we could select all files and also you the drag and drop feature. This allowed us to save a lot of time while batch converting hundreds of photos. Thus, if you need an app for the sole purpose of image conversion, you can’t go wrong with iMazing.

Permute Media Converter is a Mac HEIC Converter that converts iOS 11 HEIC photos to various file formats such as JPG, PNG, JPEG, etc. Its most promising aspect is the easy-to-use interface. However, We would not be recommending this tool to anyone with a load of photos to convert as it’s not free and provides a free trial period. If you need all the features, it comes packaged for an amount of 15 dollars. 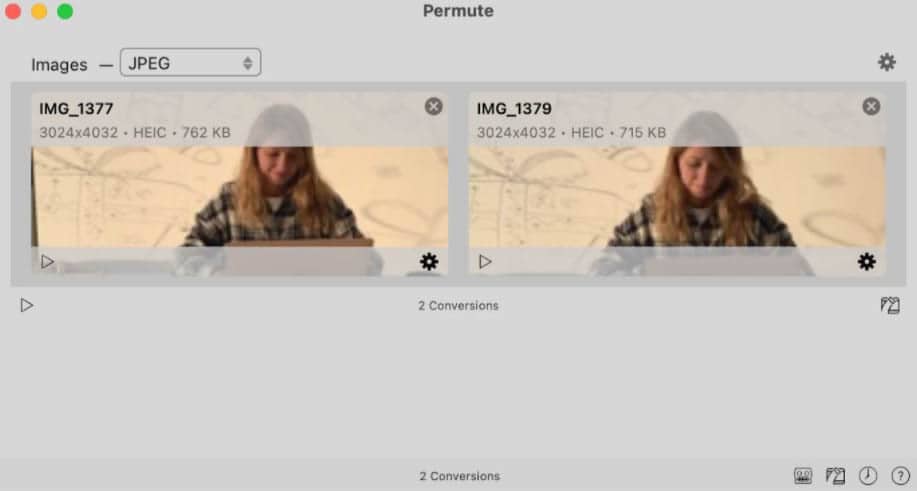 The trial version that we tested was excellent in its own right. It supported various file formats and didn’t even lag when we dropped a total of 178 files directly for conversion to JPG. However, the only major issue is that it costs money, and why would anyone do that if they can get the same functionality for free through apps like iMazing and the default Photos.

Viewing and managing HEIC files on Windows can feel a bit weird. For now, the available options are limited and can be trimmed down to a few options found below. Microsoft has released a codec, “HEIF Image Extensions”, which allows you to view and manage HEIC files directly from the file explorer. Once you install it, your PC will view the HEIC images just like any other image file format. However, the codec is only available to download for Windows 10, so if you’re on Windows 8,7 or older, you’ll need to use the apps mentioned below to get the full experience.

CopyTrans HEIC Converter is a great alternative and the best extension for the default Microsoft Conversion engine as it provides a lot of features. That being batch conversions for multiple images straight from Microsoft explorer. This makes the process way easier and doesn’t require you to select files one by one.

Remember, this is an extension, and so it doesn’t have a UI. It uses the default Windows explorer and works off through that. The conversion process is simple as it can be directly initiated through the menu box while you select the files.

WALTR is a HEIC converter that looks clean and works quickly for all your tasks. The UI is clean, simple, and beautiful, and best of all, it is jammed packed with security. Also, as all your photos are stored offline, no one can breach them so that security won’t be a concern. It also works on a drag and drop feature, and you need to get all your images in and select “Convert” to begin the process.

You can even convert hundreds of photos at once, but it does cost some performance as a cost which can feel annoying if you have many images to go through.

Some other options worth mentioning

FonePaw is a great HEIC converter but is held back with its awful outdated UI. Please don’t get me wrong, it works, and everything functions as it’s supposed to. But the thing is, the UI is something that you will look at 90% of the time, and if that’s not up to the mark, you could easily forget about using the app altogether.

iMyfone is as quirky as its name sounds. The converter works great at what it’s supposed to do but can sometimes deliver issues or crashes. We haven’t heard more about it, though, and it might just be a problem with our PC. It is also available for Mac, and the initial testing showed us promising results. So, if you’re not satisfied with the other apps listed above, try this one out for a change.

A universal file conversion service that can virtually do almost anything you tell it to, from conversions to renaming and more. You can simply add your preferred files, select the required operation or, define a new “skill” (e.g. convert HEIC to JPG) altogether for the app. The drag and drop feature has worked smoothly for the multiple files we used as a test case scenario. So far Filestar is only available for Windows, the developer will work on Mac version in the near future.

HEICtoJPG online converter is what its name suggests, with a prominent feature to provide an URL address of the image you want to convert can work wonders for some people.

How do I convert multiple HEIC files to JPEG?

You could select multiple files and drag and drop them to the converter of choice. Most converters will easily recognize all the numerous files and provide you with the best possible option to convert them to different file formats.

Are online HEIC to JPG converters safe to use?

Yes and No, don’t trust shady websites and look for secure webpages listed above. Also, be sure not to provide any information or details. There are better offline apps that do the same faster, so be on the lookout for those.

There are various HEIC Converters on the internet and depend on your computer’s OS, and you can rely on OS HEIC Converters for windows and Mac. You could also choose to convert the files to either JPG, PNG, or JPEG.

The best way to get the best deal that serves your purpose is by doing research and sometimes trying out different applications. JPG compresses a lot of the image data, making its size smaller compared to. Be ready to use all extra space when saving pictures in JPEGs that are the best file format for a realistic image, whereas JPG is better for iconic graphics, drawings, and texts.