Skip to content
The Best Computing Products of IFA 2021

These Are The Best Laptops and Computing Gear of IFA 2021 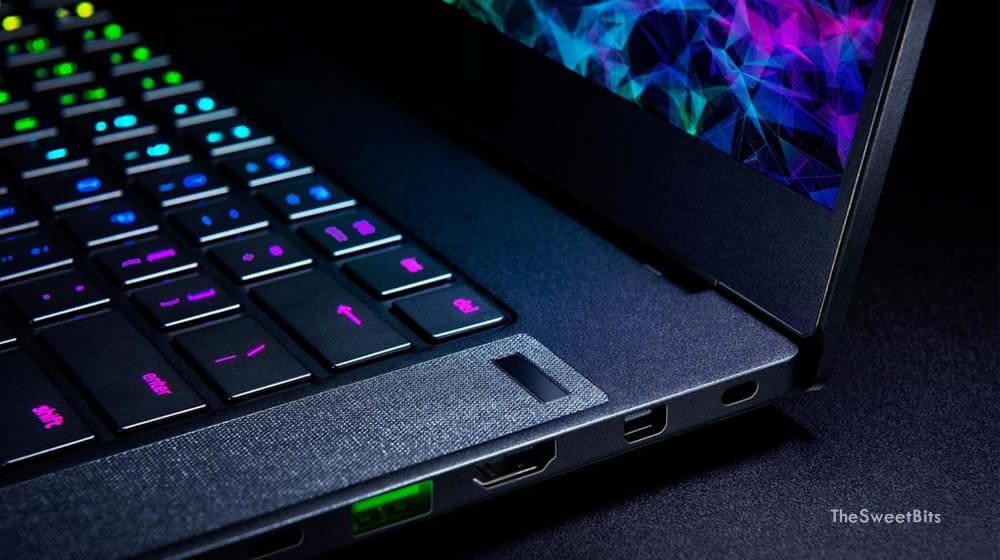 Every year, IFA witnesses some of the most anticipated devices from the computing and gaming sectors. This year, IFA, as such, was not a crowd-gathering event, sure. This didn’t, however, stop tech giants and startups from showcasing what they have been working on in the past couple of years.

Long story short, if you are looking for innovative laptops, computing technology, and gaming hardware, this IFA 2020 won’t disappoint you. And, while we cannot cover every laptop and computing gear that was announced in the event, here is a quick look at the devices that we believe can make a difference.

Honor from Huawei could be a relatively new name in the computing market, but it has not stopped the tech firm from doing the best with its brand-new portable computer. While the name and design have an uncanny similarity with Apple’s lineup of laptops, Honor has done a fantastic job of combining high-end performance and affordable pricing.

Weighing just 1.7 kilograms, the Honor MagicBook Pro may seem like many other underpowered Ultrabook laptops in the market — except it isn’t. This performance-friendly notebook is equipped with the Ryzen 4000 series processor and desktop-class cooling. When combined with up to 16GB of RAM and 512GB of full SSD storage, this 16-inch laptop becomes an attractive choice for most people.

After considering the power inside this device, the price tag of around $1000 would be surprising. Sure, it is powered by an AMD processor, but the 4000 series has proven itself in the past months. On top of all these, Honor also assures a battery life of up to 10.5 hours, which is bonkers. The catch? Well, we don’t think you’d be seeing these laptops in the US anytime soon.

Altogether, Honor MagicBook Pro is a fantastic combination of performance, elegant design, and portability while costing way less than a premium smartphone today.

Lenovo has been trying to create the perfect thin gaming laptops for a while now. While its Lenovo Y740 did a decent job, there were some drawbacks. This IFA, the company has fixed the issue through the brand-new gaming-centric laptop — Legion Slim 7i. While the computer hasn’t been upgraded to the 11th-gen Intel processors, it packs the trusty Intel Core i7-10980HK, which can provide a smooth gaming experience for most customers.

Lenovo has also kept the NVIDIA GeForce RTX 2060 Max-Q in the package. However, the real show-stealer in the package is the design itself. The manufacturer has perfected the design, adding more ports and focusing on ergonomics. The rearranged arrow keys and the extra space for ventilation work together to provide a streamlined gaming experience. Customers can also choose between the standard 60Hz screen and an improved 144Hz screen.

In the end, the Lenovo Legion 7i retains the impressive parts but adds even more to the package. From the improved design to extra ventilation, this enables hassle-free gaming on the go. 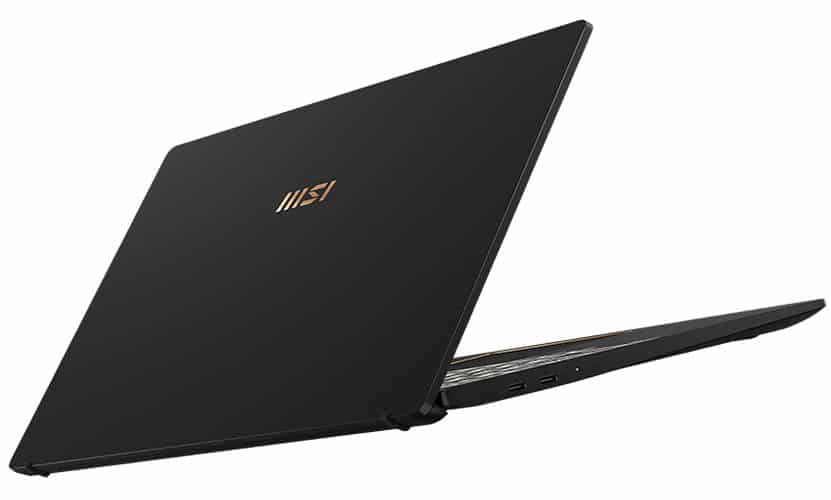 MSI did something so classy and innovative during the IFA 2020 — it launched the world’s thinnest gaming laptop. You heard that right. Packed with a thickness of just 0.63 inches, MSI Stealth 15M is probably the thinnest-profile gaming notebook you can purchase. While other companies have tried and succeeded in making portable laptops before, what makes this MSI product different is the performance and hardware you can find inside.

As you could guess, MSI Stealth 15M uses the top-of-the-line processors from Intel’s 11th-generation lineup. Combined with sufficient RAM and Thunderbolt 4 connectivity, gamers and professionals don’t even have to think twice about the package. The company has also packed a 15.6-inch full HD panel with a refresh rate of 144Hz, which contributes a lot to the fast gameplay. Under all these lies, the power of NVIDIA GeForce RTX 2060 as well.

MSI has also priced this gaming device quite reasonably so that everyone with a near-premium budget can get their hands on this revolutionary, portable gaming tech.

MSI has been making gaming-centric desktops and laptops for decades now. In this edition of IFA, however, the company decided to put the focus on its latest Summit series of notebooks. All the four models from the series — Summit E15, Summit E14, Summit B15, and Summit B14 — are using the 11th-generation CPUs that offer top-end performance and intelligent battery consumption.

While all these models have some signature features like a new security chip, Infrared webcams, and support for Thunderbolt 4, the specs do vary a lot. For instance, the E series Summit notebooks are powered by a 4K panel, whereas the B series laptops have gone for an FHD panel. Similarly, while the E series notebooks make use of dedicated graphics from NVIDIA, the B series has stuck with Intel’s integrated graphics.

MSI has also chosen a minimalistic aesthetic design for the laptop series, which adds so much appeal to the eye as well. Considering the brand-new chips and overclocked resources that the device packs, it becomes an easy choice for both professionals and gamers in the scene. It also comes in handy that the device packs all the standard connectivity options.

Overall, the Summit series of notebooks from MSI is not just aesthetically pleasing, but they bring the best combination of performance and productivity features. 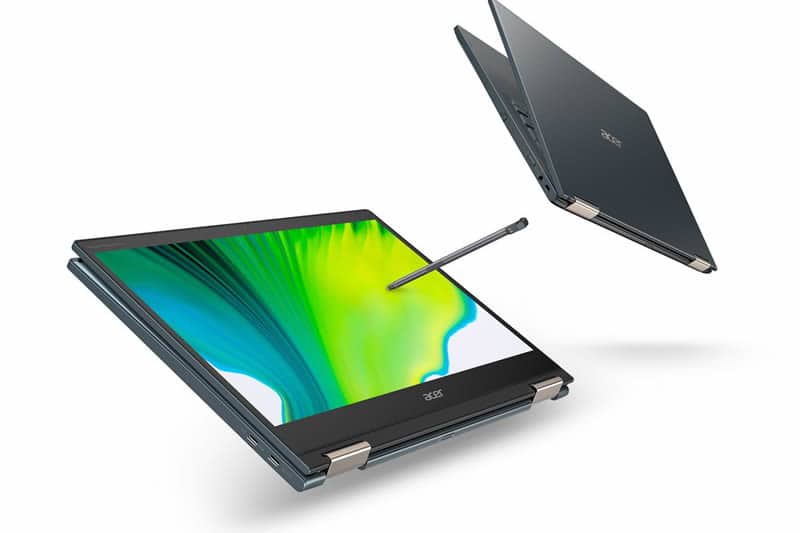 While many manufacturers covered on this list are upgrading their devices to the 11th-generation Intel Core processors, Acer seems to be moving in a slightly different direction. Acer Spin 7i, the latest announcement made in IFA 2020, is powered by a Qualcomm Snapdragon 8cx Gen 2 processor. In case you didn’t know, this chip brings 5G connectivity, and you can enjoy blazing-fast speeds on this device by inserting a compatible SIM card.

The package becomes even more impressive when we find that Acer offers multi-day battery life on a single charge, which is bonkers. The company has also added a Wacom pen, which supports up to 4096 levels of pressure sensitivity. So, this ARM-based laptop would be an excellent addition for artists who prefer a portable laptop that lasts for days. Despite the thin and flexible design, Acer has also included USB Type-A and Type-C ports.

You may want to keep a look at the market for this device to launch. Given that Acer puts it in the right price bracket, this could change the way we look at hybrid devices.

In addition to the 5G-capable hybrid laptop, Acer has improved two of the most popular devices in its current lineup. The company has upgraded Acer Swift 5 and Swift 3 to the 11th-generation Intel Core chips. Acer says that the new chips would improve the overall productivity of the devices, especially using the instant wake feature and the improved integrated graphics from the Tiger Lake chips. This has been done with no impact on battery life.

Acer Swift 5, in particular, is aimed to be the performance beast that doesn’t take a toll on battery life. On a single charge, this laptop can function for around 17 hours, which is impressive. Besides, the touchscreen-based laptop comes with fast charging support and improved connectivity standards. Considering that all the features come at an affordable price adds one more reason why Swift 5 could be one of the big success stories from Acer.

It is good to see that the newer-generation processors are making their way to low and medium-budget PCs and laptops.

ZenBook Flip S was one of the most popular devices the company had launched in 2017. For three years, the device did not receive any updates, though. At IFA 2020, however, the company decided to announce a long-awaited refresh of the notebook. The ASUS ZenBook Flip S UX371 is also equipped with the 11th-generation Intel Core processors, setting the performance standard.

In terms of specifications, the ASUS ZenBook Flip S belongs to the premium category of notebooks. You can have up to 16GB of RAM in the package and up to 1TB of full SSD storage. When it comes to visual real estate of the device, the 13-inch 4K OLED panel does wonders. The 360-degree hinge design equips the device to be used from various angles as well.

One thing that ASUS has not changed with the refresh is the design. Unlike the previous two new laptops we covered, the ASUS ZenBook Flip S has kept its original design. On the bright side, you now get Thunderbolt 4 ports and a full HDMI port, among others. ASUS, however, has not specified the pricing details of the device — but it comes available for purchase in October.

Overall, ASUS has finally refreshed the ASUS ZenBook Flip S, with 11th-generation Intel processors and a well-detailed display, along with super-maxed specifications.

Although announced in a Samsung-exclusive event, the Galaxy Book Flex 5G has attracted a fair amount of attention from the tech world. This 5G-enabled 2-in-1 device can take your productivity levels to the highest point, according to Samsung. In addition to being the first 5G laptop from Samsung, this device comes with the S Pen that has become synonymous with the Note series of products. The device also comes with features like instant wake-up and fantastic battery life.

It is impressive to see that manufacturers are moving to the unexplored areas with the help of 5G. It should be noted that the laptop runs on 11th-generation processors from Intel and that it can support up to 16GB of RAM and 512GB of SSD storage. A backlit keyboard, superior audio, and extended support for Wi-Fi 6 make this an attractive package, even if we keep the 5G connectivity aside. It is also running an optimized version of Windows 10 Home and 10 Pro.

Compared to the hybrids that we usually see in the market, the Galaxy Book Flex 5G is a significant step forward, and it would be awesome to see more manufacturers pick up what 5G’s blazing speeds can offer.

Long story short, the RTX 3090 can replace almost every premium graphics card in the market, but NVIDIA has added that this variant would be made available to a broader user-base. The slightly low-end version of the card is the NVIDIA RTX 3080, which is made to take the place of the current 2080. NVIDIA is also launching the RTX 3070, which is the lowest-end version in the premium category.

What’s the point of having an 8K-compatible graphics card if you cannot get the right gaming display? Well, Acer’s latest addition to the Predator lineup picks things up from this point. This gaming-centric monitor has used NVIDIA’s technology and comes with a whopping refresh rate of 360Hz. This could very well be the best gaming laptop in the market from the snappiness point of view.

But the monitor had to cut things down in some areas. For instance, you are locked to a Full HD panel, and it has a size of just 24.5 inches. However, considering that it’s the first variant of the product, we can expect the same 360Hz panel with better canvases. As it goes without saying, the 360Hz Acer Predator X25 gaming display packs every other feature that gamers look for.

All the devices on this list are going to take our computing experience to a new level, be it professional or in terms of gaming quality. As we said, it’s good to see that manufacturers are now focusing on reasonably pricing all their products. At TheSweetBits, we always dream of the day when good tech is available for all.