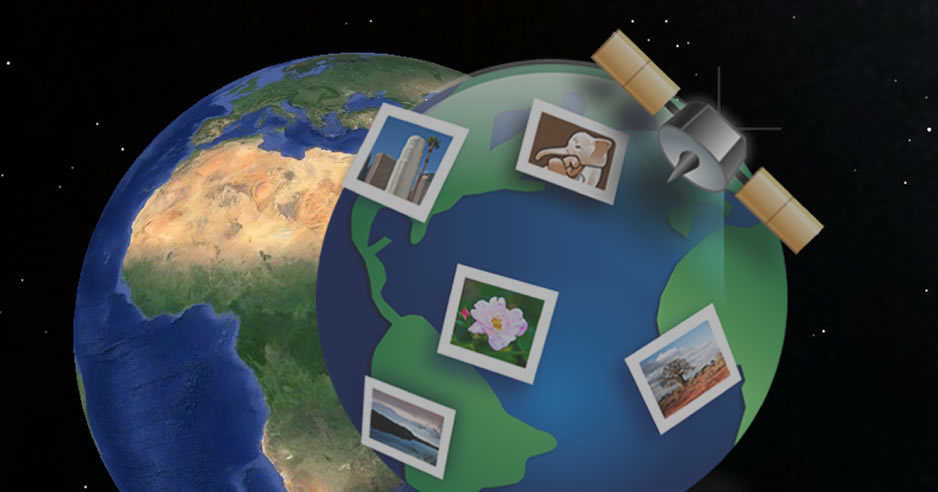 We can never get enough of good photography. It’s not just us. The evolution of the internet and social media has only made it easier to share pictures with our friends, families, and loved ones.

But pictures are more than imagery. They serve as details for extensive research. You may want to remember where, when, and under what parameters you took them.

Most of the phone cameras support geo-tagging — a feature that adds geographical coordinates to the pictures.

However, looking at the importance of geotagging and geocoding images, it becomes essential to have an app that is dedicated to doing just that. So if you are a professional who plays a lot with photographs, you’d want an app that logs time, date, and location of events with precision.

HoudahGeo 6 for Mac is one such app to pin your photos so that you know exactly when, where, and under what circumstances they were taken.

We have been testing the latest version 6 for a while. So let’s see what it has to offer, and if it could actually be a valuable addition to the sweet bits on your Mac.

HoudahGeo 6 and its use cases

HoudahGeo is a photo geocoding and geotagging tool which you can use to attach GPS coordinates and location names to your photos. It writes EXIF and XMP geotags to JPEG and RAW image files, which creates a permanent record of where a photo was taken. It works just like a GPS-enabled camera. 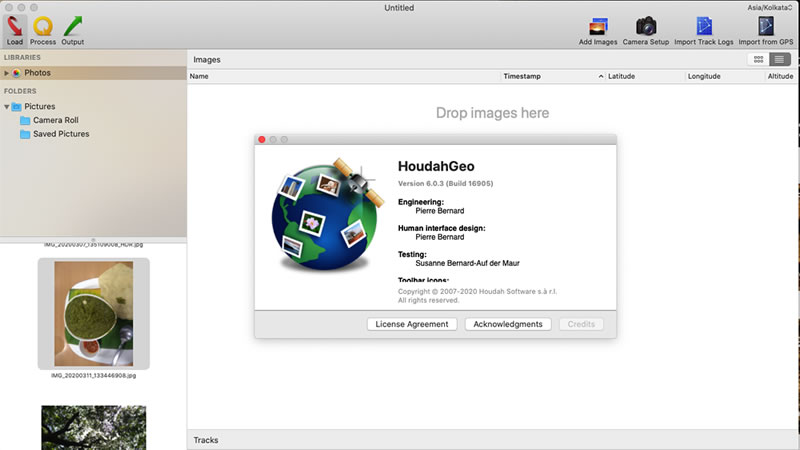 HoudahGeo 6 has a few specific use cases. The use of this app really depends on you. Even though it can be used for professional purposes, you can also use it for something as simple as keeping a detailed record of all the pictures you took over the Spring.

Here are some of the most common use cases of HoudahGeo 6.

Archiving happens to be one of the most essential use cases of HoudahGeo 6. The EXIF and XMP geotag, written by HoudahGeo, create a permanent record of where a photo was taken. Once that is done, photo management software like Apple Photos can then organize and find photos by location.

This feature is of great aid as years from now, you may not remember when you took the photo you are looking for. You might remember the season you took it. This way, you can sort out all the images in a friendly and timely fashion.

Another widespread use case of this application happens to be with publishing images. The app adds location information to the “story” of a photo. With a bird’ s-eye view of where you took your photos and the route you took to get there. This lets you relive and recount your adventures.

It even gets better for publishers. If you want to publish all these pictures in a sort of memoir or a magazine where you really need to address when each of these pictures was taken, then this feature will come to be really useful.

How is geotagging different from assigning locations?

You may wonder how it’s different from tagging location in Apple Photos.

Location information added in Apple Photos exists only within the library database, and the original images remain unaltered. Only exported versions of the photo can be set to include geotags.

This is where HoudahGeo plays an advantageous role.

Geotagging writes location information to metadata tags within the original image files, creating a permanent bond between a photo and the location where it was taken. HoudahGeo writes the same industry-standard EXIF and XMP as used by GPS-enabled cameras. Such geotags can be used by Apple Photos and other photo cataloging, editing, or publishing tools.

While Apple Photos does a decent job showing photo locations, adding location information to more photos can be tedious.

When working with Apple Photos, iPhoto, or Aperture HoudahGeo offers a “best of both worlds” solution as the app can geotag original image files in a future-proof way. It can also notify the media library of updates to location information. i.e., add “locations” to photos in the library catalog.

HoudahGeo 6 is a pretty simple app that is easy to use.

We downloaded a 27 MB zip file. Post-installation, the app opened to ask a couple of permissions to access media libraries.

Now, if you already are a user of Apple Photos, then you can use this app instantly as it will load all the parts. But before we get into how HoudahGeo loads images and starts working with them, let’s try to get a deeper context into its appearance.

HoudahGeo 6 is a simple app that uses the drag and drop feature for images. You can drag images directly to start working on them. What a great relief if you are working with a large batch of files. 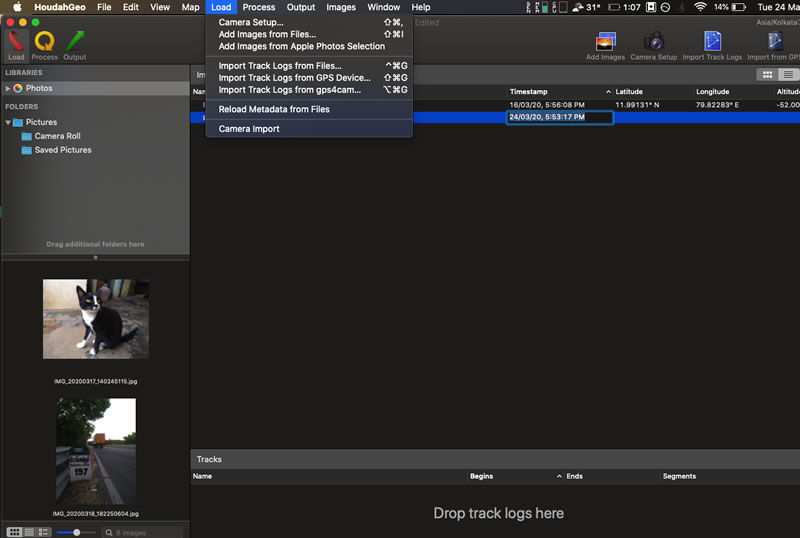 It also has presets for folders where it scans for images. The library shows all the photos that you have synced with your iCloud, and then there’s an option to view all the locally stored photos.

All of these are neatly categorized towards the left side of the screen. You can just right-click to add more images and folders into the section.

There are three buttons on the top-left side of the screen: load, process, and output.

Suggestive of the name, the load tab lets you upload and add pictures — through drag and drop and by adding folders manually. Then comes the process field where you can look at the location of the images and track them the way that you want.

The Process segment is quite handy as it shows you precisely where the image was taken. There are no vague estimations. It has pinpoint accuracy — at least in the way it imports and writes information on images. It lets you easily trace image locations on the map. There are multiple viewing modes, such as map, satellite, and hybrid that let you figure out how when you took the image. Here, you can also look at the altitude and geocode if there’s support for that.

Next comes the output field where you get to export your images to EXIF/XMP, Google Earth, Photos library, KMF, and Flickr.

The export options are pretty cool because they help you establish direct links between your timestamps and the places where you can use them.

The latest update brought some really cool and much-awaited features to the platform. One of the highlight features of the new update is its ability to deal with JPEG and RAW images. Since some cameras can save two versions in the same photos, this new feature lets the app handle these two files as one. So when you perform an EXIF / XMP export, HoudahGeo 6 updates both files with the same information.

Another much awaited feature — a top request — is the timezone support. The latest update lets HoudahGeo specify the time zone to write dates and times to EXIF/XMP metadata. If you forget to set the camera clock, the timestamp can appear disrupted. HoudahGeo comes to the rescue by letting you update dates and times to match the local time.

We worked with images over time and realized that it got more comfortable as we spent more time with it.

Once we drag an image, we get to input more details about the image so that HoudahGeo can have things on record. If you access pictures from your synced library, you will have better access to information such as the location of the photos, since the images that you take through your iPhone or any other newer phone camera get automatically logged. 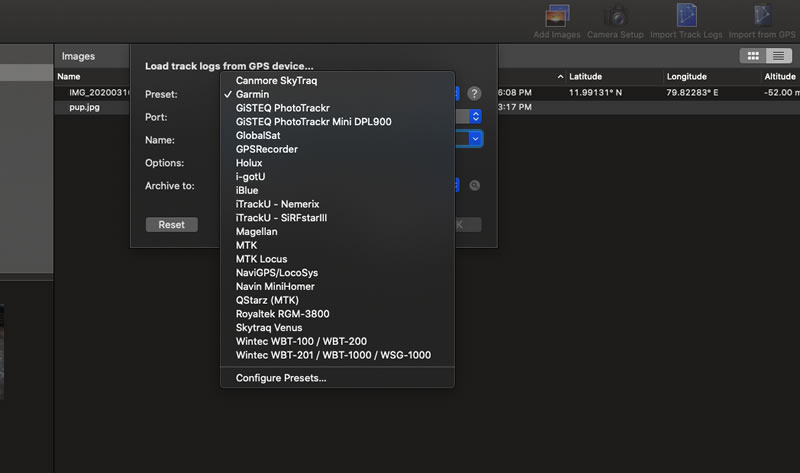 If you are planning to mass import information from a GPS device, then you can easily use the app to set up a camera as well as GPS. Available presets do well with guiding through the setup.

With the ability to import information from GPS, you get to add even more details to your gallery. The option to set up a camera also makes it much easier to import images in bulk. 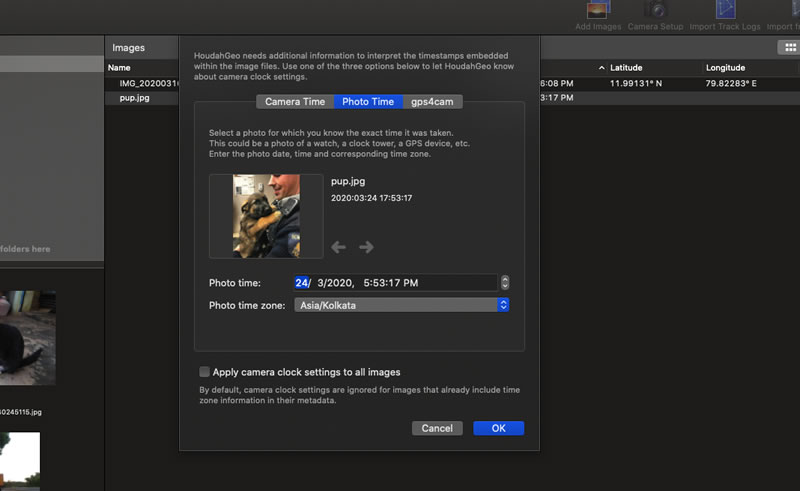 One thing that we noticed is that if you copy and paste an image from your library to the HoudahGeo 6 interface, it won’t really detect the timestamps. You have to download the image and then upload it to the interface (in case you are uploading images from places such as Google Photos) or drag and drop it. Only uploading an image in its entirety helps retain its timestamps and other properties.

It can browse Apple Photos, iPhoto, Aperture, and Adobe Lightroom Classic libraries to create a list of photos you can geotag.

Flaw but not a dealbreaker

While HoudahGeo 6 does prove to be a robust and competent app to log you image details on your Mac, you might still wish that it got a tad bit user friendly. Yes, the app can seem overwhelming at first appearance, especially if you are new to timestamping pictures externally and using a GPS to import stuff.

We wished that there was a small tutorial that could guide us through those overwhelming numbers and formats. A quick tutorial would make things much more straightforward.

However, this isn’t much of an issue. The more time you spend with the app, the more comfortable you will get with it. It is something that you could adapt to once you start playing around with its settings and features.

HoudahGeo 6.0 is priced at $39 (+ tax) for a single-user license. A full-featured demo version is available.

You get to upgrade from previous versions of the app by paying $24 (+ tax) for a single-user license.

The demo version of the app limits you by letting you export no more than 5 images at a time. However, that should be enough for you to figure out whether you actually need an app or not.

You need to be on the macOS 10.14 Mojave or macOS 10.15 Catalina to run the app, You can use HoudahGeo at its full functionality if you also have a GPS tracker or a GPS camera.

If you are into photography, or a large part of your work revolves around having to do with images, then you could seriously consider buying this app.

The newest update has support for features such as scuba diving logs that let you add information about the depth below water. Yes, exciting things are happening at HoudahGeo — the addition of extreme sports logging would only take it to the next level.

They’re also quite active on Twitter, so you can know what they have been up to and what the future updates might contain.

HoudahGeo 6 continues to shape up image cataloging, With features that seek to revive the way photos are stored and filed, it is worth the purchase.