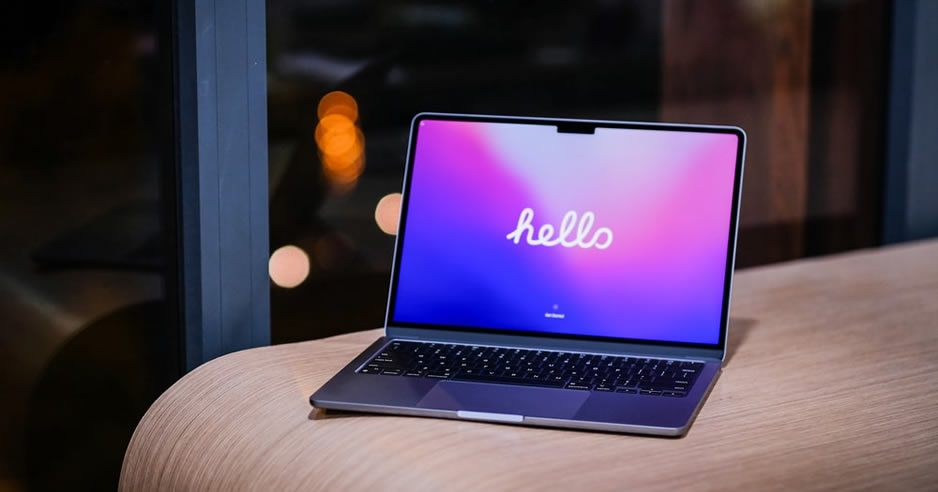 Overheating MacBooks are no extraordinary news to the tech world. Apple is infamous for thermal throttling and overheating issues, especially when you push its compact notebooks to the edge. However, Apple rebuilt its reputation with recent devices equipped with M1, M1 Pro, and M1 Max Apple Silicon chips. For the most part, Apple enthusiasts were satisfied with the ventilation and thermal performance of MacBooks.

With the much-anticipated M2 Apple Silicon, things were expected to become better. But, apparently, things have taken a turn for the worse.

According to recent reports, both devices equipped with Apple M2 chip — MacBook Air M2 and Pro M2 — face severe overheating issues. Reviewers and enthusiastic customers have shown their disappointment at how quickly and frequently their MacBook Air and Pro devices heat up. But, of course, these incidents only happen when you push the device for maximum performance.

But again, many prefer MacBooks over other Ultrabooks due to the former’s ability to push further. So, we thought we should discuss this issue and point you in a helpful direction.

First, how to know if M2 MacBook Air/Pro overheating or not?

Unfortunately, macOS does not have built-in functionality to let you know when the device is overheating. Instead, the device will throttle its performance to keep the temperature low. So, you would know that your M2 MacBook Pro or Air is overheating only when you see a loss of performance/speed.

But, there is a solution you can count on CleanMyMac X. 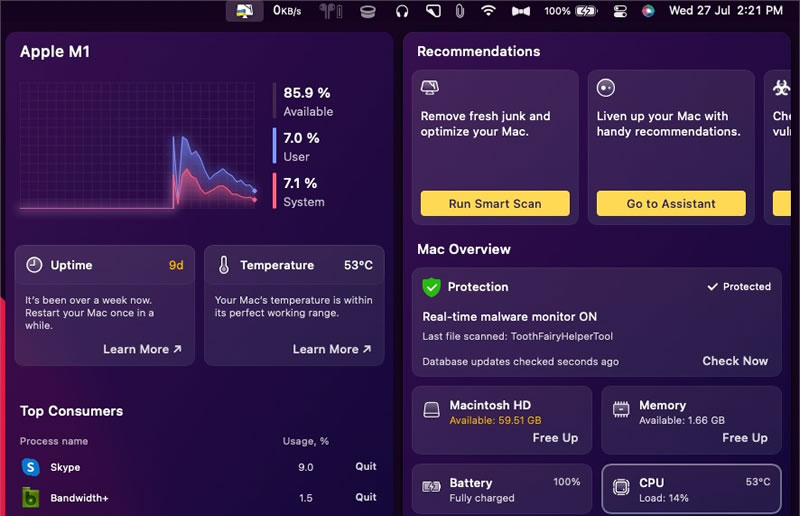 CleanMyMac X is a macOS cleaner and optimization tool, available free of cost. It has a feature called the CleanMyMac X Menu, which stays on the menu bar and gives you insights. You can use this feature to keep an eye on the overall temperature of your MacBook Pro or MacBook Air.

Here’s how it works:

You can install CleanMyMac X on your M2 MacBook Pro/Air and enable the CleanMyMac X menu. After that, you can open the menu bar widget and click on the CPU button. You should be able to see some statistics on the CPU performance.

As you can see, a widget section is dedicated to giving you insights into the temperature. Instead of showing you the number, the CleanMyMac X menu will tell you whether the temperature is normal or not. You can also see the CPU load and uptime of the system. In addition, you can quit the apps consuming a lot of CPU resources.

Moreover, the CleanMyMac X is worth using as its menu will notify you if the MacBook Pro/Air temperature rises beyond a point. So, it is when you should know that your MacBook Pro/Air is overheating. And, if this keeps happening often, it is time to look for reasons and solutions.

Before we discuss potential solutions, we should understand why M2 MacBook Air and M2 MacBook Pro are heating up so much.

Even though both devices are related, the reasons for overheating seem different for both. So, let us consider the case for each.

Why is M2 MacBook Air overheating? 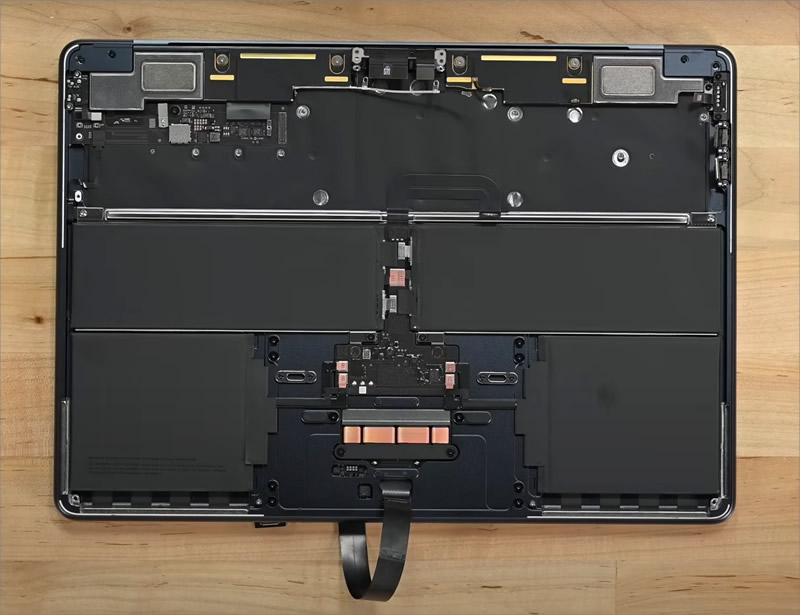 According to the iFixit teardown, Apple has made two questionable selections regarding the M2-equipped MacBook Air.

As you can guess, the second choice seems to be the reason for the overheating issue on the M2 MacBook Air. Let’s listen to a part of the transcript from the iFixit teardown video:

How does this thing cool down? Sure it has a lot of thermal paste and graphite tape, and yeah, the M2 is efficient, but this shield is super thin, so it’s not helping much, and the case is lighter than last year. Maybe the M2 Air is secretly an iPad, or maybe Apple is just letting it run hot.

As it happens, even iFixit is not sure how Apple expects the M2 MacBook Air to cool down. So, at this point, only Apple knows what drove the company to make such a questionable choice.

Thanks to the teardown, we know what is causing the overheating issue on the M2 MacBook Air: the lack of fans, heat pipes, and ventilation.

Don’t worry; we may have some solutions for this issue.

Why is M2 MacBook Pro overheating?

Despite all these issues, the M2 MacBook Pro offered a decent Mac experience for the most part. However, reviewers and users have pointed out the throttling and overheating issues in recent weeks. Of course, it is not something people expect from a Pro device of this reputation.

For instance, people started facing thermal throttling when trying to edit 8K RAW footage. Of course, we know that’s an extreme task and cannot be taken without a grain of salt. However, other users have also reported similar overheating issues.

According to what Apple claims about the M2 chip, it should not have happened. Instead, it seems to be the same old thermal throttling issue from Apple.

Fortunately, the M2 MacBook Pro comes with fans and heat pipes. So, fixing the overheating issue will not be impossible.

How to cool down the M2 MacBook Air?

Unfortunately, the overheating issue on the M2 MacBook Air does not have a single-click issue. Because the device does come equipped with fans or heat pipes, you cannot rely on manual override options. Otherwise, you could have run the fans at maximum speed so that the device cools down.

Even so, we could find some solutions to fix an overheating M2 MacBook Air.

You can easily find a laptop cooling pad on the market. However, make sure that you also find a power source for the cooling pad since the M2 MacBook Air does not have a USB-A port. Once you have set things up, your MacBook Air should handle extra pressure without overheating.

Of course, you cannot rely on this method when you carry the laptop around. But when was the last time you edited 4K footage on the go?

As you can guess, some MacBook enthusiasts were devastated by the overheating issue on the M2 MacBook Air. One could not go for a laptop cooling pad but wanted a relatively stable solution. This person, who is also a YouTuber, found a Do-It-Yourself way to fix the overheating problem.

Here’s what he did:

In a video published on the YouTube channel Max Tech, the YouTuber can be seen installing thermal pads inside the M2 MacBook Air. The thermal pads, which cost $16, can increase heat flow between the internals and chassis. As a result, you can fix the problem of overheating to an extent.

You may have already guessed the issue here.

So, even though the DIY method costs only $16 and requires a few minutes, there are potential issues. We believe most people do not want to void their Apple warranty by adding a thermal pad.

You can combine this method with the first one.

It is a good idea to make sure that your M2 MacBook Air does not waste resources. For instance, background-running apps are known for causing overheating. Then, by reducing the number of such apps and processes, you can reduce the chances of overheating.

In the meantime, you can wait for Apple to acknowledge the issue and come up with a solution.

How to cool down the M2 MacBook Pro?

Cooling down an overheating M2 MacBook Pro is easier — primarily because it comes with a fan.

So, in addition to the two methods we recommended for MacBook Air, you can try another way.

Because the M2 MacBook Pro comes with cooling fans, you can use them to reduce overheating. Here’s the problem: Apple does not give you manual control over cooling fans. It means the macOS system will decide the running frequency and speed of the cooling fans.

At times, these calculations may be insufficient. So, if you want maximum performance from your MacBook Pro without overheating, you should find an option for manual fan control. And, we can recommend one of the best tools for the same: TG Pro. 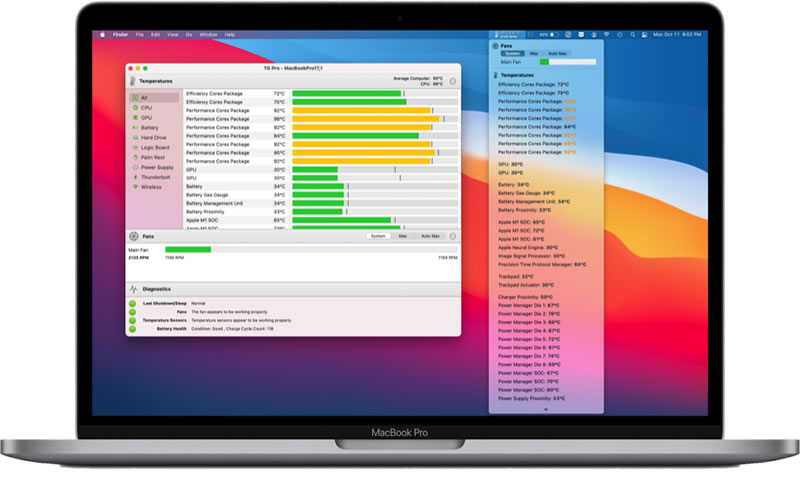 TG Pro is a powerful macOS utility that enables fan monitoring and control on macOS. We recommended it during our coverage of the best system monitor apps for macOS. In this case, you can use TG Pro to run the cooling fans at the desired speed. For instance, if you want your Mac to handle hefty tasks, you can set the fans to run at maximum speed.

You can also explore different options within the app. For instance, TG Pro allows you to turn on the fans at a particular power consumption point. So, for example, you can increase the fan speed when the CPU usage reaches a specific point.

Alternatively, if you keep your MacBook Pro powered on most of the time, you can set up TG Pro to keep its fans running all the time. It may make your MacBook Pro a bit nosier, but you can (almost) stop worrying about overheating and throttling. Read our full TG Pro review for more.

Tips to prevent your MacBook from overheating

Now that we have explored specific solutions to fix overheating on M2 MacBook Pro and MacBook Air, shall we go through some general tips? These tips will help you keep your MacBook from overheating — which, in turn, will increase your MacBook’s lifespan.

All MacBook devices come with some kind of ventilation. However, these spots may get blocked due to dust or debris. Therefore, you should ensure that the ventilation options are open. For example, smoking near your MacBook is not a great idea. The smoke particles will get into the vent and block the airflow. So, it will be a good idea to clean your MacBook occasionally.

We mentioned a scenario where the MacBook Pro started overheating when editing 8K RAW footage. It tells you a few things. First and foremost, you should not push the device beyond a limit. Second, if you want to do some heavy tasks, you should keep enough resources ready. For instance, you can close or minimize other tasks, including those power-hungry Google Chrome tasks.

We always say this: run the latest version of macOS and third-party apps. Sometimes, even a single mistake in code can put an app into an infinite power-hungry mode. On the other hand, the updated software will ensure everything is running smoothly. For example, if you face overheating only after opening a particular app, you must update it to the latest version.

With these precautions, you can reduce the chances of overheating on your MacBook. Of course, some of these are true for other Mac (and Windows) devices. So, you can thank us later.

As we said earlier, the idea is not to push your MacBook beyond a limit. But how do you know the limit? How do you know which apps are using the resources?

More importantly, how do you know when an app takes up more resources than it should?

Here is how system monitoring apps can help you. These apps will monitor the system resources and notify you when things go south. For instance, you will receive a notification when the CPU consumption exceeds the recommended limits.

We recommend iStat Menus for this purpose. Due to a few reasons:

iStat Menus does not take up a lot of resources, either. So, it’s a win-win situation for everyone. By keeping an eye on how your Mac consumes resources, you can prevent instances of overheating.

We hope this guide helped you fix the overheating issues on the M2 MacBook Air and M2 MacBook Pro. We do not have a sure-shot solution for the M2 Air, but you can try the methods you find feasible.

We have also recommended a few general ways to keep your MacBook devices away from overheating. So do make sure that you follow those tips.