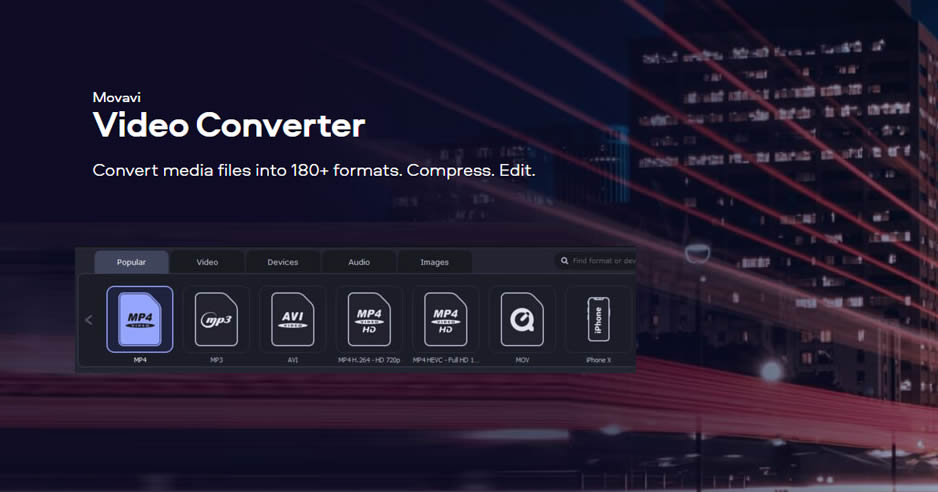 Video is definitively the most popular media format for entertainment. If you own multiple devices, you know the hardship of finding compatible media formats.

Movavi Video Converter is a popular video conversion solution here. Available for Windows and macOS, the tool is the main consideration for both professionals and common users. Considered as the epitome of simplicity and power, Movavi Video Converter allows you to convert videos into almost every format.

For the following review, we had tested the macOS version 23 of Movavi Video Converter. The looks and works of the Windows version are exactly similar, though.

On both Windows and macOS, it’s incredibly easy to get started with Movavi Video Converter. You have to download the setup file from the official website and the wizard will lead you. The installation process does not take more than a few seconds.

We also liked the fact that Movavi Video Converter doesn’t take up much space from your Mac or PC.

Once you are done with the installation, you can see the intuitive main screen of Movavi Video Converter. As you can see in the screenshot, there is nothing confusing on the screen. The whole UI has been designed in a way that you can convert any video in just a few seconds. 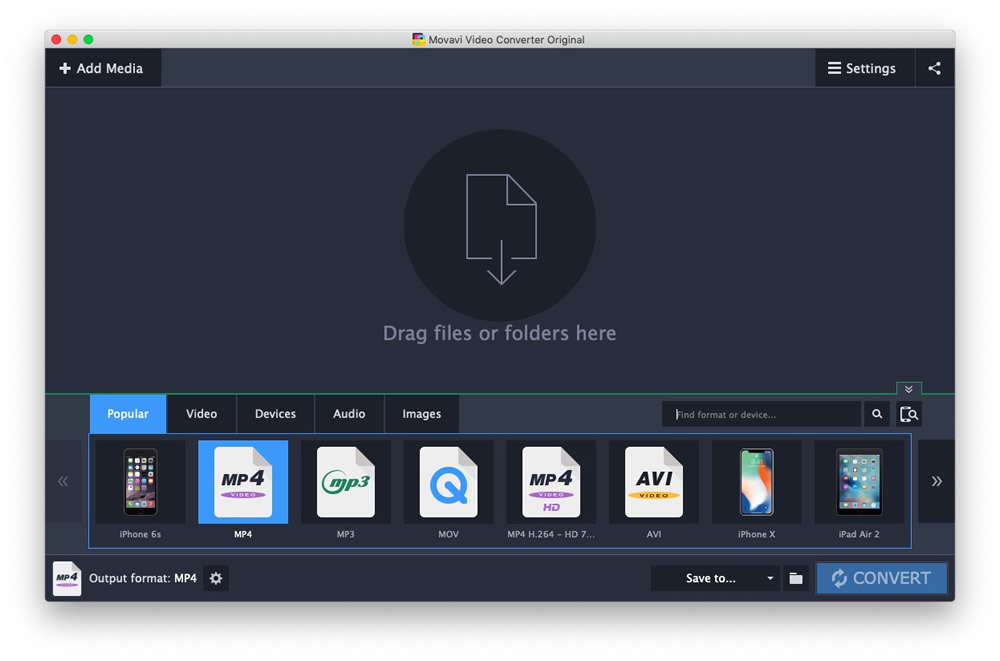 Talking about the UI, the core idea here is simplicity. When compared to most of the video converters we’ve come across, Movavi Video Converter has a sleek design. Everything is well-arranged and you have enough toolbars at handy locations. And, if you are interested, there is a fully-fledged Preferences pane as well.

We tried converting a few videos to see the conversion process of Movavi Video Converter.

To begin with, you can add videos to Movavi Video Converter from multiple sources. The best way is to drag-and-drop the video onto the screen. However, you can go ahead and add audio files, images and entire DVD collections to the interface. Movavi Video Converter will be able to convert all these types of content without much effort. 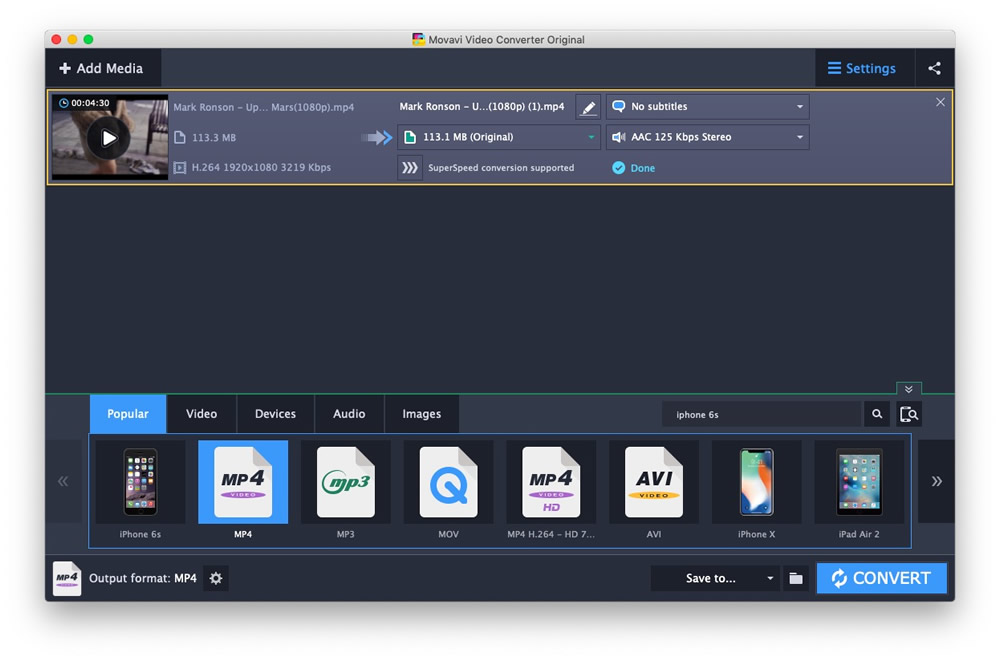 In seconds, Movavi Video Converter will analyze the selected file and show you options. For instance, it will tell you if the file supports SuperSpeed Conversion, which is the hardware-accelerated conversion mode. In the same way, you can set the preferred output size and quality. There is also a choice to convert a sample portion of the video to see how things work. 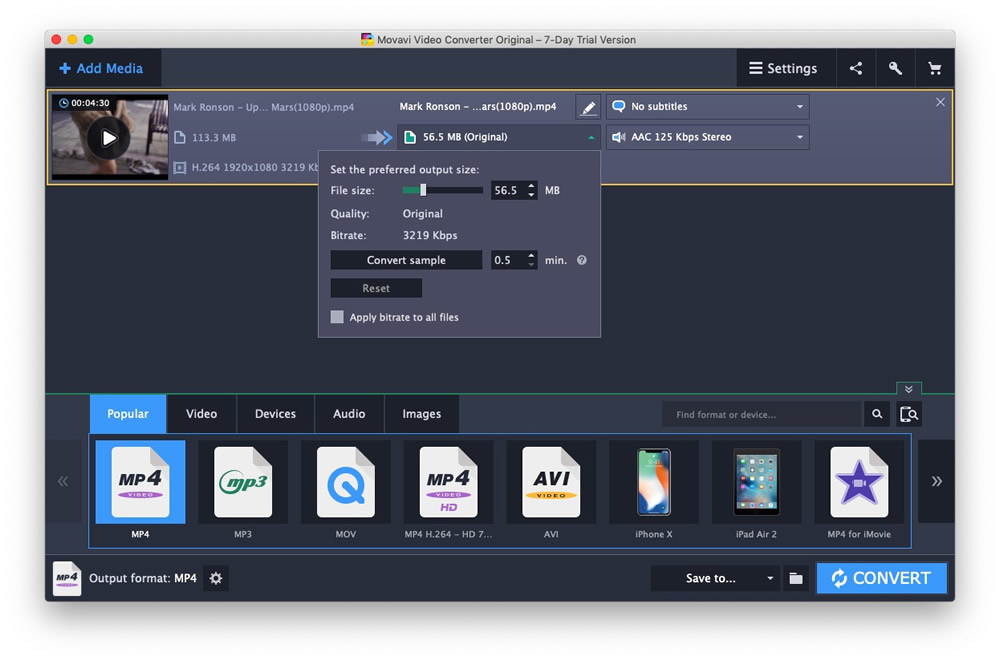 The next step is selecting the output file format, and this is where Movavi Video Converter makes all types of differences. You can normally choose the file formats from the conventional lists — Popular, Video, Audio, Devices and Images.

In short, the video conversion process is as smooth as a cake.

Just to give you an idea, I have used so many video converters for personal and professional needs. And, yet, something needs to be said:

Movavi Video Converter is currently the fastest video converter you can get for macOS and Windows. There are a few reasons. First, Movavi Video Converter is a dedicated video converter with proper algorithms to support codecs and everything. Second, it makes use of SuperSpeed Conversion whenever possible. It means the program will make use of GPU resources instead of dumping everything on CPU.

I added 10 videos in different size into the program, it just took several seconds to convert videos within 200 MB, for those larger than 500MB and even up to 1 GB, it basically took me less than 5 minutes.

When I mean fastness, not only imply the conversion process, but also refer to its fast responsiveness. From the action to upload video, tweak settings, to detect accessible devices, this video converter can fast respond and navigate users accurately.

Talking about the quality, that’s pretty awesome too. We compared the source video and the output videos. The results were amazing. Of course, there is the basic loss because of format change. But, apart from that, Movavi Video Converter keeps everything super-crispy. As it happens, it’s also one of the very few converters to do that.

Compatibility is indeed the strongest point of Movavi Video Converter. There are two main things we loved in this sector.

First, Movavi Video Converter introduces a brand-new way to choose the desired format. Sometimes, you’d not know the right format for your device. At these instances, you can search for your device in the database and select it. The database consists of presets for popular devices from manufacturers like Apple, Samsung, Sony PlayStation, Xbox and other Android and iOS devices. And, if you have connected your device via USB, Movavi Video Converter will recognize the device and choose the format for you.

Second, Movavi Video Converter offers in-depth support for a huge number of formats. Even if you narrow things down to a particular section — say Audio or Video —, there are hundreds of formats to choose from. It’s pretty great that you can convert your media content to almost every device out there. You can simply move between the options and pick the one that’s right for you. It does not matter if you have an iPhone or a brand-new proprietary device, Movavi Video Converter will help you.

In addition to this, Movavi Video Converter allows ample amount of customization for every format. When you have selected the output format, you can see a Settings icon near the name. You can click on it and alter a few settings such as the codec being used, frame size, bitrate, etc. along with some advanced settings. It’s also offering audio-based settings.

As we said earlier, there are some added features in every video converter and Movavi Video Converter isn’t different either. Let’s have a look at some of the impressive ones in the lot.

Basic Edits: While Movavi Video Converter may not be a replacement, you can use it for basic edits. For instance, you’ll be able to crop the video or change the aspect ratio. More importantly, if you are converting a movie file, it is great to add subtitle while converting. It seems that the developers have included additional features that can really help us.

These are the additional perks you’ll have right now.

There aren’t any major drawbacks in Movavi Video Converter. However, we thought a few things could make the software better.

First of all, we expected more editing features in Movavi Video Converter. Of course, it lets you add subtitle files and alter the resolution, but more could have been better, and these don’t affect the actual conversion process.

Also it would have been great if Movavi Video Converter had an option to convert YouTube and other online videos directly. This would be a great feature for those who want their favorite videos on their devices.

That’s all for now.

Movavi Video Converter is available for both Windows and macOS. In case of Windows, you must be running XP or later. In case of macOS, anything after OS X 10.7 is supported. That essentially means almost every PC and Mac out there.

You can download and use the limited free trial for as long as you want. The output video will have a watermark. If you want to remove that, the premium version is available for different plans.

Premium plans are as follows:

Even after a comprehensive review, Movavi Video Converter remains the favorite pick of ours. It packs some of the most-needed features for video converter and presents everything in a simple UI as well. Considering the number of features in the package, the whole deal is quite reasonable as well.

Altogether, you can never go wrong with this tool if you want a high-quality video converter with top compatibility and conversion speed. As we said earlier, even when not using the SuperSpeed profile, Movavi Video Converter allows you to convert videos without quality loss.