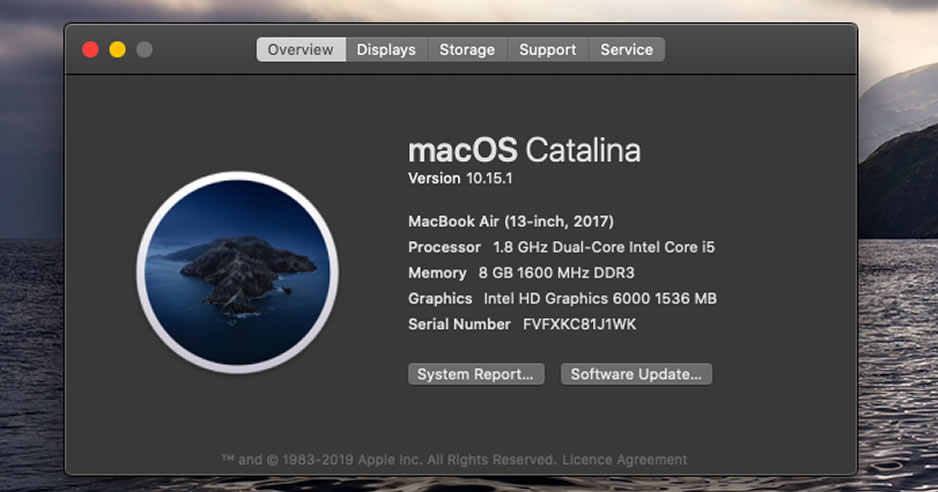 There were several updates brought to the macOS with the launch of Catalina around the way photos are organized in the native Photos app, notes are taken, apps are downloaded, and how connectivity is extended to iPads and other Apple gadgets.

It also brought an intelligent redesign. With new and improved features, macOS Catalina is another shade into the wholesome zen-like appearance that Apple’s operating system aims to bring forward. There are significant and subtle changes in almost all the apps, including Mail, Notes, and Reminders, that add additional features to boost your productivity.

Let’s look at some of the most interesting, yet lesser-known updates to macOS Catalina apps.

Apple introduced Screen Time in Catalina. It lets you know how much time you spend on one app. You can also control how much time you want to spend on your Mac, iPhone, and iPad. There’s even an option to schedule down times that limit app notifications of the apps.

The new communication features allow you to control who is allowed to interact with your kids on the FaceTime, Phone, and Message, and yes — you can use family sharing to set up everything!

The focus in macOS Catalina seems to be on redefining the way apps operate and communicate with the macOS, and cast a more natural approach to browsing apps.

Do more with the Photos app in macOS Catalina

The Photos app in macOS Catalina saw some major updates that combine an aesthetic and resourceful user interface and effective AI-based data analysis. The new update identifies patterns to make decisions within the app.

Now, photos are geographically and chronologically sorted under events, such as a trek, sunsets, first trip to the beach, or a birthday party. Much like Google Photos, the app has been updated to tag people by their facial features.

It can also curate the best photos for you and remove duplicate of poor-quality shots.

Photos would earlier allow you to sort pictures by location and time to display them in the Photos category. The category has now been updated with a tab where you can sort your photos by day, month, and year. These viewing options use transitions and animations to separate the timeline.

There are other new and updated features, such as a dynamic display of live photos, memory movies, the best shots, and others that make viewing, storing, and sharing Photos a richer experience.

It is helpful when the errors we face while operating with media — such as uploading them to a server — are well displayed and not left hanging as you fear that you might lose on those dear photos and videos.

Often, due to connectivity or other issues, you might have trouble uploading some media to your iCloud account. This issue would be previously shown at the bottom of the All Photos view. However, it wouldn’t precisely show which of the photos was causing the issue.

With a new and dedicated album for photos that don’t upload, it becomes easier to track which of the photos had trouble uploading, which makes the whole problem easier to fix.

The new Catalina update got away with iTunes and broke it down into three apps — Music, TV, and Podcasts.

For the Music app, your albums — both online and offline — fall to the left side of the app. There is also an option to access iTunes through the app where you can access albums that you want to purchase or stream.

The Music app integrates well with your Apple Music subscription, whereas the TV app is a platform where you can rent and buy movies and sync them across your Apple devices.

The Watch now feature on the TV app brings together everything that you’ve been watching on iTunes and Apple TV to bring together a more personalized recommendation experience.

If you’ve your the Podcasts app, then it’ll be quite easy to have it set up on your Mac — all your podcasts get synced to your laptop with seamed integration. You can pick up from where you left, and the same applies to the TV app as well.

It is a sync game across these apps and iTunes, only much more categorized and easier to access.

You could neglect the mail app as much as you want — truth be told, it is getting better with every update, if not perfect.

The options come forward with the mail app as well. The in-built Mail app on macOS now comes with the option to mute threads and block senders. This way, it becomes much easier to have a cleaner, clutter-free inbox, primarily if you deal with large volumes of emails every day.

The intelligent design around the Mail app now also highlights the unsubscribe link at header, so it becomes much easier to unsubscribe from those notorious promotional emails.

You also get a re-arranged view of your emails with an added option to preview a selected message right or below of your email list.

Reminders and notes app got better

The Reminders app on Catalina has been rebuilt to include new ‘smart lists’ that show everything that’s due today, scheduled for the future, and flagged — everything that you’ve ever added — all sorted and well-categorized according to priorities.

The Reminders app now also supports sub-tasks for the very first time, so now you can break down your tasks methodically for a more detailed and structured approach — the sweetest bit of the Reminders app, we think.

With the new update, you can now share your lists on the Reminders app with anyone as long as they have an Apple ID, unlike the older Mac versions that would only let you share it with your family.

It integrates well with other apps and also lets you add attachments that go with a task. Siri peeps in, suggesting you to add a reminder when you make plans in Messages; tag someone people in the reminder too. 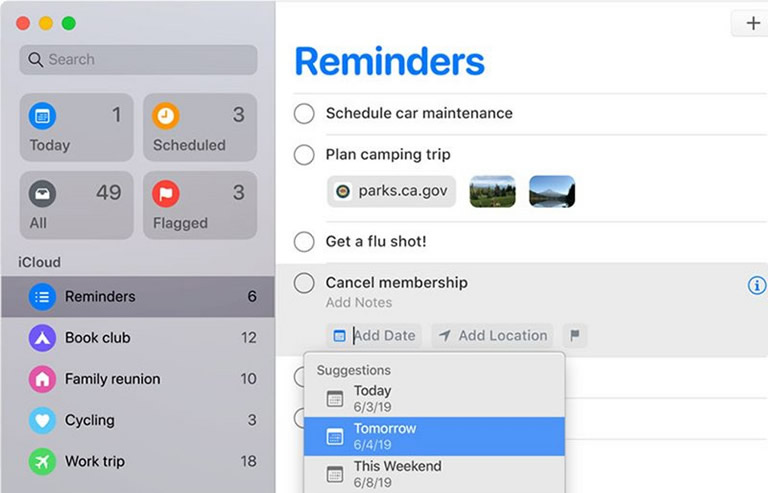 The Notes app, on the other hand, now includes a new gallery-like view that shows your notes as thumbnails — a great feature if you use a lot of sketches from your iPad, links, and photos. It is now much easier to find things quickly.

Other updates to the Notes app includes a better search (with built-in document scanner) and improved sharing features. While these don’t change the app fundamentally, these are some great addition to have.

Picture-in-picture in QuickTime Player and Safari

There are a handful of updates made to the seems-to-be-dying QuickTime Player.

Now, it has support for Picture-in-Picture mode, so you can play video in any independent resizable window. This PiP feature on QuickTime Player on Catalyna allow you to watch videos while working on other things. Now, that’s a productivity hack that Apple realized.

There’s also a support for Open Image Sequence which lets you create H.264, HEVC or ProPres-encoded movie files with numbered images in a sequence, followed by choosing the desired resolution, encoding quality, and frame rate.

Apple has brought the same feature to Safari.  To get access to this feature, all you have to do is hold on to the speaker icon beside the sidebar.

When you open a new tab on Safari, you’ll see that the new tab comes to the right side of the current-open tab, rather than being the right-most position. However, that’s not it — you also get to configure how new tabs open on Safari.

Now, you can configure Safari to open new tabs after related tabs, or to the right, regardless of what tabs are open.

The Safari 13 on Catalina also flags weak passwords so that you can come up with stronger passwords when you’re making an account online.

With these newly added features to Safari, browsing and watching videos are now more organized.

Do more with the Activity Monitor app

There are several sub-columns existing in the CPU and Memory tabs of the Activity Monitor, and the new feature in macOS Catalina system monitoring process management makes it easier to visualize these processes.

There is a new column animation that shows the reordering of columns under the Memory and CPU tabs.

It’s a treat to the eyes and helps much when you want to figure out what exactly changed or got rearranged as you switch between these tabs.

However, this animation is not so useful when you start sorting out the processes, especially when they are not present in the other tab, such as sorting by memory and sorting by CPU in the individual tabs.

Once the sorting animation is complete, the rows fall back to their correct position, which is by sort order.

Mac’s Activity Monitor is responsible for dealing with the processes, apps, and services that run within the OS. There are times when you’ve to quit these processes because they are not responding. Sometimes, you want to free some memory.

To ease up the process, the new macOS Catalina update brings in the option to quit multiple processes at once. When you select more than one process in the list, you get the option to quit them, unlike the older versions of macOS, where the option was disabled.

Find My for a lost device

If you’ve updated to Catalina, you’ll notice that there is a new app sitting in your app drawer, called the Find My. And yes, it can help you find your Mac, iPhone, iPad, and even AirPods.

In the new Find My app MacOS Catalina and iOS 13 later this year, you can mark your gadgets lost and access their last known location, ring them, or even erase the data on them.

macOS Catalina did away with the iTunes app. Now that the iTunes app is gone, it’s Finder that’s in charge. Finder can now take charge of your iOS device if you connect them to your Mac.

After you’ve entered the password to allow Mac as a trusted device, you can explore the storage of your device using the Files tab.

With everything in place, it becomes much easier to access your storage across your Apple devices and even transfer large chunks of data on a wired connection.

When the Finder is busy transferring and syncing with an iOS device, you won’t be able to quit the app.

The new Catalina update on the macOS brings in features that feel native. These features are well-integrated into the macOS, so it becomes much easier to use and access them. You will notice these subtle changes on Catalina as you spend more time with your macOS, figuring out how the new in-app and OS changes reflect against the backdrop of the Catalina islands that make for the theme of this update.