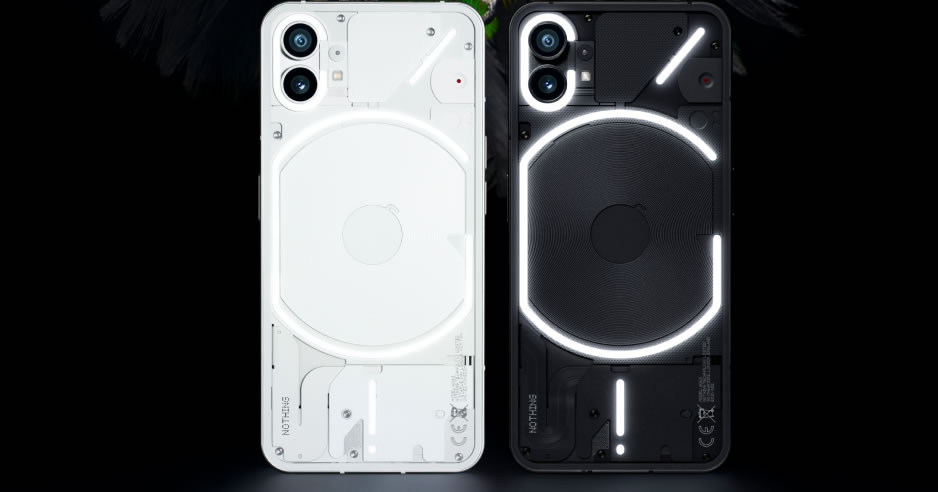 At TheSweetBits, we are excited about every product that promises to deliver something better.

The case of Phone (1), the debutant smartphone from Carl Pei-led Nothing, was not different.

And I’d be lying if I said that I have been desperate enough to get my hands on this brand-new device. There was so much hype, and it was time for me to upgrade from my Pixel 4a anyway.

So, I was one of the first to preorder Nothing Phone (1), and I received it the next day. It has been my daily driver since.

And I thought I would share my first hands-on impressions of this much-hyped Android smartphone. It is not a fully-fledged review, though.

On the other hand, I wanted to let you know whether Nothing is successful in keeping its promises.

First, let’s talk about the device and some specs.

Nothing Phone (1) is not the most unique-looking Android smartphone! On the other hand, its overall design has borrowed elements from many other popular smartphones, such as the new range of the Apple iPhone. It’s not to say that Phone (1) is unoriginal, though. 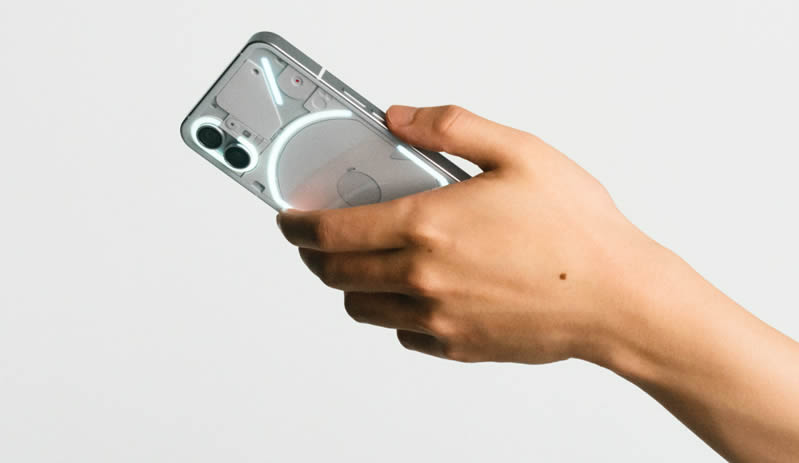 Despite the similarities in design, the Carl Pei-led team has managed to leave some finishing touches. Let’s take the Glyph Interface, for example. The Glyph Interface is a unique arrangement of thousands of LEDs you can customize and use. These LEDs will blink according to your ringtone or notification tone.

While some say it’s a gimmick, I believe it’s a worthy addition to the package. I mean, there is that incredible feeling of seeing something you have not seen before. And, if the Glyph Interface does not appeal to you, it can be turned off instantly.

Or you can use it as an alternative for the good old notification LED that Android devices used to have.

The device, as such, feels classy and impressive. However, when almost all Android smartphones look the same, Nothing Phone (1) makes a few differences. According to the company, the device has been built using recycled Aluminum and bio-plastic materials.

So, compared to an iPhone with a steel-based chassis, Phone (1) weighs less.

The design does not tamper with the premium feel, though. Instead, there is a premium heftiness that you can feel while picking up the device. As someone who uses Android and iPhone, I could notice many common points.

Nothing Phone (1) seems to keep its promises regarding the device design. However, it is not design alone that determines the overall Android experience, is it?

From its early days, Nothing had promised a “new experience” through its devices. It is a work in progress in the case of Phone (1). 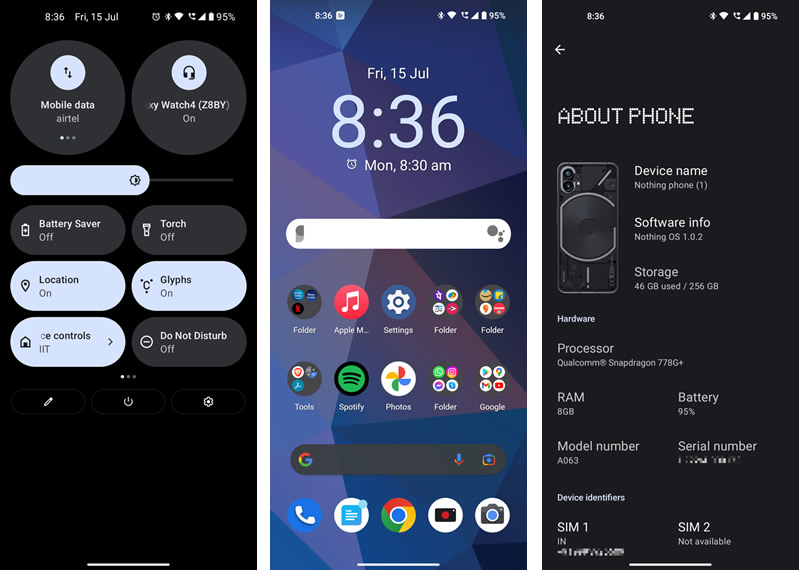 Nothing OS is perhaps the best thing I found in the Nothing experience package. The company has designed Nothing OS based on Android 12, and there is no bloatware. Except for a few tweaks in design and branding, the OS delivers an almost stock-Android experience.

Yet, like OnePlus used to do with its first devices, Nothing has added some additional features. For instance, Phone (1) has a camera app with extra modes like Macro, Expert, and Night. Similarly, you can unlock a few additional features from Settings.

The company also offers 3 years of Android updates and 4 years of security patches every 2 months. So, it is not expected to have the common issues on Android. That is, of course, given that Nothing does a great job in development.

Nothing Phone (1) is not a flagship!

It does not come with the latest Snapdragon processor, either. Instead, it uses a Qualcomm SD 778G+ — an SoC optimized for the device. This Octa-core processor delivers satisfactory performance for day-to-day use. In addition, it can effortlessly handle standard gaming needs as well.

However, do not expect Phone (1) to blow you away with over-the-top numbers.

You can combine this mid-range SoC with up to 12GB of RAM and 256GB of UFS 3.1 storage. I purchased the medium variant with 8GB RAM and 256GB storage. Since the device does not offer expandable storage via SD card, the extra space made sense.

Together, Nothing Phone (1) makes things simple and satisfactory, offering a dynamic Android experience. We also loved how the device handles multiple instances.

Nothing has nailed the security aspect of Phone (1).

The device packs options for Face and Fingerprint Unlock. The under-display fingerprint reader does a decent job recognizing patterns and letting you in. On the contrary, the Face Unlock feature needs improvement by a long shot.

Nevertheless, you can count on these features instead of typing a rudimentary passcode.

Nothing seems to have taken a balanced decision in this department.

The device comes with a 4500mAh battery that you can charge wirelessly or otherwise. In addition, it offers 33W PD 3.0 wired charging, which refills the device in under 70 minutes.

Again, these are not the biggest numbers. However, from a convenience point of view, they make sense.

I have been using the device for two days, and the battery performance is impressive. Even when the battery dips, 10 to 20 minutes of charging will provide enough juice to move forward.

Together, we have no complaints about the battery and its performance.

I will share some of the photos I took using the primary sensors. Let these pictures tell the story. 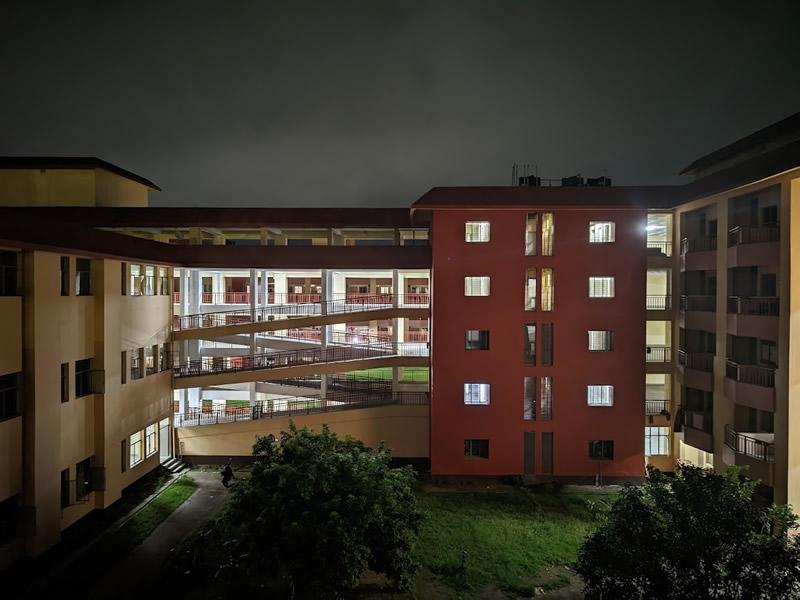 Nothing Phone (1) uses a single USB Type C port for charging and data transfer. On the bright side, you have UFS 3.1 support, meaning that data transfer will be quick.

You cannot find a 3.5mm jack, and the company has neither provided an adaptor. As for the power brick, there isn’t one in the package.

You can purchase a separate 45W power brick from the brand.

Altogether, the experience from Nothing Phone (1) was up to the mark. The device provided more than what I had in mind.

Before we talk about the final verdict, let’s look at the pricing sector for a bit.

In the UK, Nothing Phone 1 (8GB/128GB) is available for 399GBP, which converts to almost $475. However, the device will not be available in the United States.

You can also expect some regional pricing plans and discounts. In my opinion, Nothing has nailed the pricing game.

Now, to the final verdict.

I believe what Nothing has done deserves a lot of praise. It is a work in progress, but the elemental stones seem strong.

Personally, I have equipped the device with all the apps I use, including those productivity apps and other things. Even with around 100 apps that I regularly use, multitasking is not an issue for the device. So, it gives us some hope on where the device can be.

More importantly, the company has created an impressive Android experience via Nothing OS. It is equally supported by excellent hardware.

Altogether, in light of a few days’ experience with this device, I think Nothing Phone (1) is worth checking out — at least once.