Prizmo 4 (for Mac) Review: An Effective Scanning and OCR Tool 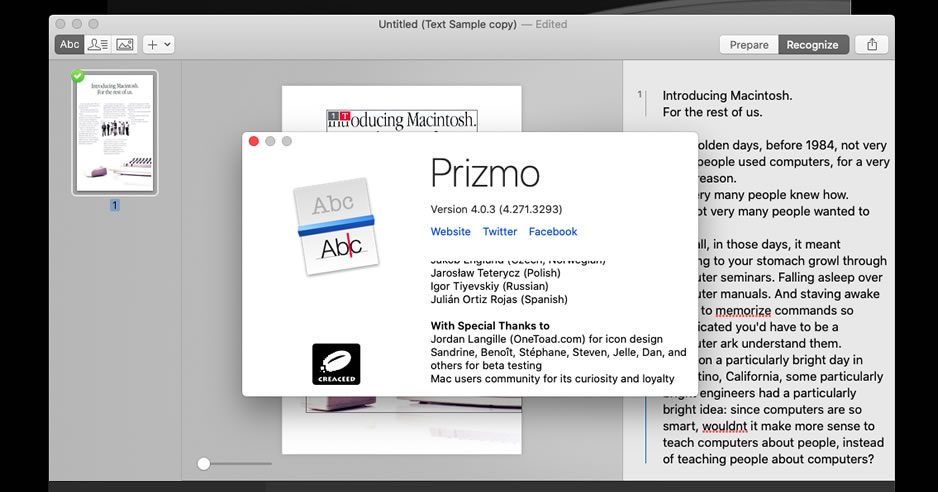 Have you ever had a bunch of images with valuable information that you wished you could import on your Mac or your smartphone?

Or just a few PDFs or some notes on paper? There are also research papers, pamphlets, and business cards that you might want to archive in the form of text.

Usually, it means taking a picture of them, scanning them, and saving it on your Mac or your smartphone. But it doesn’t preserve the elements from the image.

It fails to read and store information from images, which makes it harder to edit or share them as text snippets. It’s inconvenient for students and professionals who have to deal with a lot of infographics and other text-based images.

This is where a good photo-based scanner app comes handy.

An image and document scanner app for Mac saves you much time, which you would otherwise waste in manually scanning through — zooming in and out — of those pictures that you have clicked through your smartphone or digital camera.

Prizmo is one such app that does this job really well.

We tested this latest version 4 of Prizmo for some time and realized that it has the real potential to put an end to our common image-scanning woes.

We tested several reports and infographics on it, and here, we will tell you more about the app — the good and the bad, if you should invest in it.

Prizmo 4 pros: is Prizmo worth it

Prizmo 4 is a Mac app for scanning and recognizing text on documents, images, and business cards. You can use it to effectively analyze and store the text from various documents and images. Its OCR feature supports 28 languages, translation, and image correction.

It can just be the tool that you can use to save time and increase your productivity.

Here are some of the Prizmo pros that we thought made it a must-have application for Mac.

1. An easy to use and intuitive interface

One of the nicest things about Prizmo is its easy to use interface. You won’t take a lot of time to get used to this neat-looking app.

The feature that we loved here is its ability to take snapshots from the screen to process the further inside the application. It just makes everything much more accessible, especially reading and collecting notes.

The app’s welcome screen is quite intuitive. It lets you create a new document, open a new document, or even work with some sample documents so that you can figure out the app’s capabilities and features.

There’s also a link to their help section in case you feel stuck and want to read some tutorials before you want to begin.

The app can be controlled from the menu bar — each of the options present you several tools that you can use.

The edit screen is laid out in three sections — the left bar shows you all the pages in the document. The middle part of the display works as the element editor, where you can select individual elements from your document. The right-most part of the screen serves as a preview panel that neatly and categorically displays you the extracted texts with maximum accuracy.

You can also right-click on individual elements and boxes to perform specific operations such as copying a page, preserving line breaks, zooming in, and more.

You do not feel lost while using the app, and this is a big plus!

Finally, there’s the bottom toolbar with the options to add, delete, merge, and reorder text boxes. It also has the option to perform OCR,
translate, and use the speech function.

There are several ways to import a file on Prizmo. You can drag and drop files to the interface, open and search your local drives, and even import or shoot pictures from your iPhone — yes, they do have a pretty cool iPhone app that syncs well with your Mac app.

Once you successfully import the document, you get the option to rotate it, crop it, adjust dimensions, contrast, brightness, along with other enhancements.

Features such as a media browser that can be accessed directly from the menu bar make it easy to select multiple images from different locations on your Mac.

There’s also a camera calibration assistant that guides you through the entire process of calibrating your app. It is used to remove lens distortion in pictures.

The OCR feature is one of the most promising elements of Prizmo.

The recognize button placed at the top-right of the main interface allows the app to scan text from images and other documents and convert them into editable digital characters. All the text that the app scans is shown on the right side of the interface. 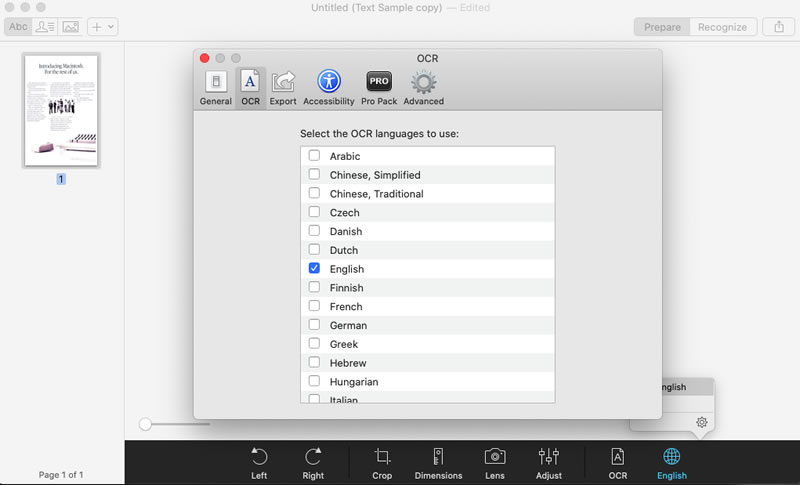 We were surprised by the state-of-the-art OCR technologies, and we managed to save a lot of time, which we would otherwise spend manually copying and typing. Prizmo supports Optical Character Recognition (OCR) in 28 languages,and translation into 59 languages.

Prizmo works by recognizing texts and categorizing them into different regions and boxes. If you want to add specific text regions, you get the option to do that by making boxes with your hand around the text. Prizmo then scans your selection and provides an output on the right side.

4. Translate and speech for added convenience

The speech feature lets you read out your text selection in eight different voices and accents. It even enables you to increase or decrease the playback speed.

It’s a great feature if you want the app to read out some amazing stuff that it managed to extract from images and other documents. Again, this is another feature that adds a more personalized touch to the app.

The translation is Prizmo’s other key feature. You get to translate your text boxes in several languages. We liked the language options that Prizmo provides, showing that it’s well aware of the diversity.

So if you have a language that you would want your texts to be translated in, it is highly likely that Prizmo will have a localization feature for you.

One of the reasons for having an application such as Prizmo is to convert multiple files at once. The need to work on various files and images could arise while working with multiple documents in academic, official, or personal spaces.

Prizmo lets you all multiple documents in a specific window and configures settings individually for each of these documents. You can set output format, OCR language, and more. While this process takes place, you are free to work on something else of your liking.

We love it when an app has helpful options to export and share documents and letting others access it as well.

You also get to save documents straight to your hard drive and skip the backup stage.

Another great thing that we noticed about Prizmo is that it is easy on your computer’s resources. It barely takes any memory resources and doesn’t cause a significant dent in your processor’s workflow. 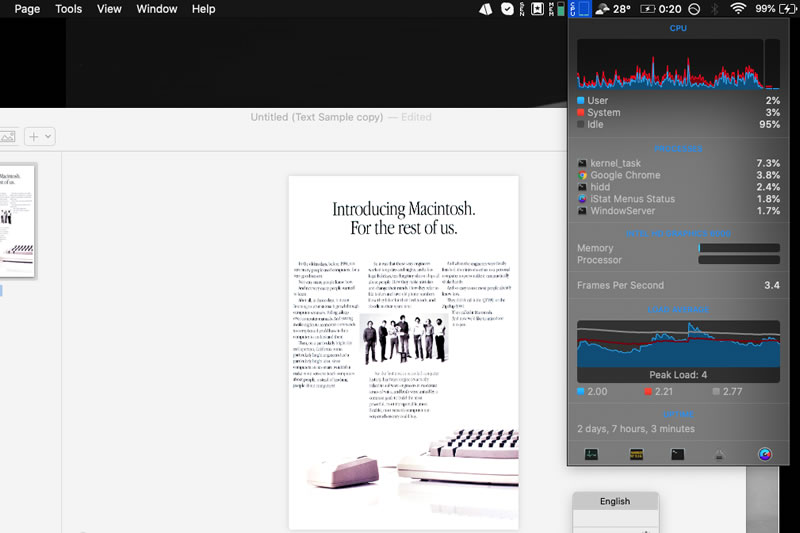 Things are as smooth as they should be.

We tried scanning multiple pages through Prizmo and realized that our Macbook performed the entire task with ease. This is good news if you still are on older Mac hardware.

We were still left with more than half of CPU usage and ample memory for more tabs on Google Chrome multiple tests on our Macbook Air 2017. It proved that Prizmo could take large tasks well to provide an almost fluid experience.

Prizmo 4 cons: is Prizmo worth the cost?

Now, Prizmo is an excellent application, but there’s undoubtedly ample room for it to get better.

We think Prizmo will be more chiseled if it manages to fix a couple of problems mentioned below:

For instance, we could not find a dark mode in the app. The lag is at a time when most of the apps that are regularly updated have started support for dark mode.

Imaging being adapted entirely to dark screens at night and then coming to Prizmo for some important work only to find it does not have support for dark mode. A bit annoying, right?

But considering the way Prizmo developers have been working on updating the app, we could expect a dark mode soon — a feature that can be easily accessed from the startup page or the View menu.

2. Can be slow sometimes

Now, this is something that is not frequent.

Throughout our usage, Prizmo slowed down a couple of times. It usually happened when we tried to switch between formats. It takes a while to load up and this may hinder your performance. We have also expressed this concern with Prizmo and they are quite positive about it.

We recommend that you save your documents regularly while working on Prizmo until the developers manage to squash these app slowdowns.

It’s rare, but saving is always advised as you’d want to be careful about not losing your work.

Sometimes, users might be overwhelmed with the interface and the exact roles of each button. This happens when we are not used to using OCRs or image-scanning tools.

Initially, there was some fumbling as we worked our way through the application’s content and features.

Here, Prizmo could really have a 3-4 point skippable tutorial that could guide users through the essentials of the applications. That way, it would be much easier to figure out the app so that users can use it at its full capacity at the earliest.

The Prizmo Pro lets you perform all necessary tasks which the Prizmo does. Along with it, it also provides you access to additional features such as neural network-based translation in 22 languages and batch processing. 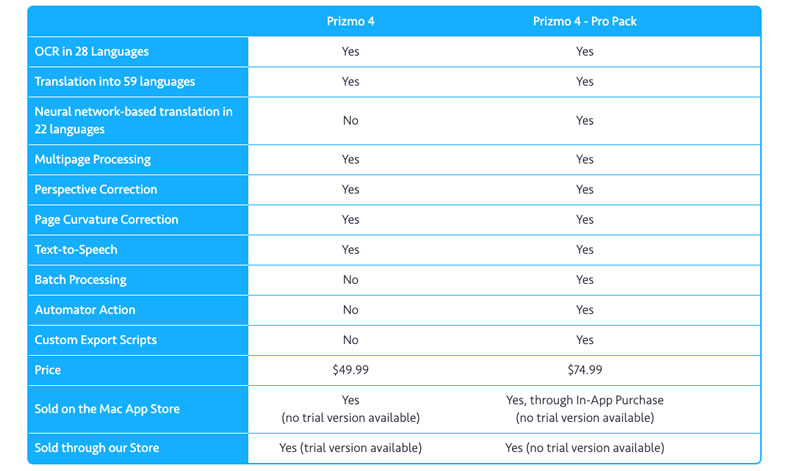 You can also purchase them through the Mac App Store and Setapp.

Do we recommend Prizmo 4?

First thing — it saves you all those extra hours that you spend on online OCRs or apps that do not do what they promise.

If you are a student, then you might have to deal with a lot of research papers through your college years. It would be best if you invest in Prizmo as it would save you a lot of time, which would otherwise spend generating resources for those intense studying hours.

It’s not the cheapest, but it’s so well suited for the job that it makes it much easier to use it for those occasional or frequent scans of documents and images.

Besides, the fact that it syncs well with iCloud and other online storage platforms makes it much easier to share and access data. Having a Prizmo iOS app also means you have accessibility and can make the most out of your time.

Prizmo is an excellent app for your OCR and image adjustment needs. It comes with critical features that are hard to miss. Besides, it’s vast resources make it so much easier for you to make the most out of its features. It’s also a reliable app that will only get better with every update.