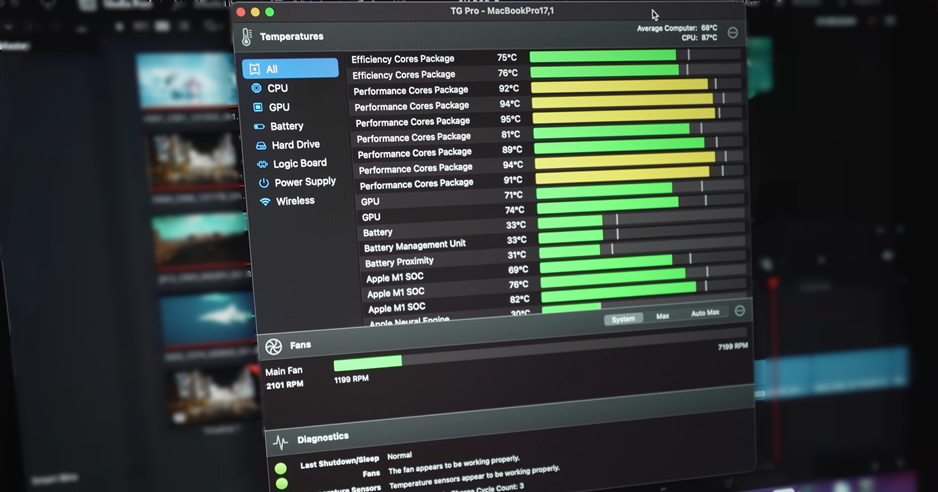 Temperature Gauge Pro, popularly known as TG Pro, is a Mac utility that has been out for quite some time now, and honestly, I love the tool for everything it helps me deal with. Read along to learn more.

If you’ve been using a Mac on a daily basis, you probably know how the device sits after a long productive session, especially with the CPU fan spinning like it’s willing to freeze the area around. I encountered the same, and right away, I got concerned if something was wrong with my hardware.

Like what we usually tend to do, I started my research on finding answers to the queries, eventually crossing paths with TG Pro. While I landed on the developer’s website, the first thing that caught my attention was a promise that said the tool would let me check what’s hidden within my GPU, CPU, logic board, and HD temperatures. Was that really so? The answer is yes.

In this article, I’ll discuss every aspect of TG Pro and walk you through the elements that can assist in efficiently running your Mac.

With TG Pro, you’re looking at a popular Mac utility coming from the home of Tunabelly Software. It is a tool that allows you to peek at the details and control the whirling fan inside your computer. Apart from helping users with fan control, TG Pro is great for monitoring hardware diagnostics and checking the limit to which your device heats up.

To put it in simple words, TG Pro allows a Mac user to successfully conclude several things that were pretty challenging before this utility hit the scene. From figuring out which component of your Mac is undergoing a temperature rise to employing the fan and cooling down the overall setup, TG Pro is designed to help improve the productivity of your Mac one way or the other.

Besides the promising features that come loaded, another element that makes TG Pro special is its compatibility. Whether you’re using a Mac with an Intel chip or the Apple Silicon takes care of your day-to-day work, TG Pro is available for both.

When we talk about checking temperature, controlling fan speed, and finding faulty sensors, we know from the very onset that TG Pro is not something that corresponds to basic utility. Surprisingly, though, the developers made sure that the overall interface of the tool doesn’t trouble much, even if you’re a beginner. 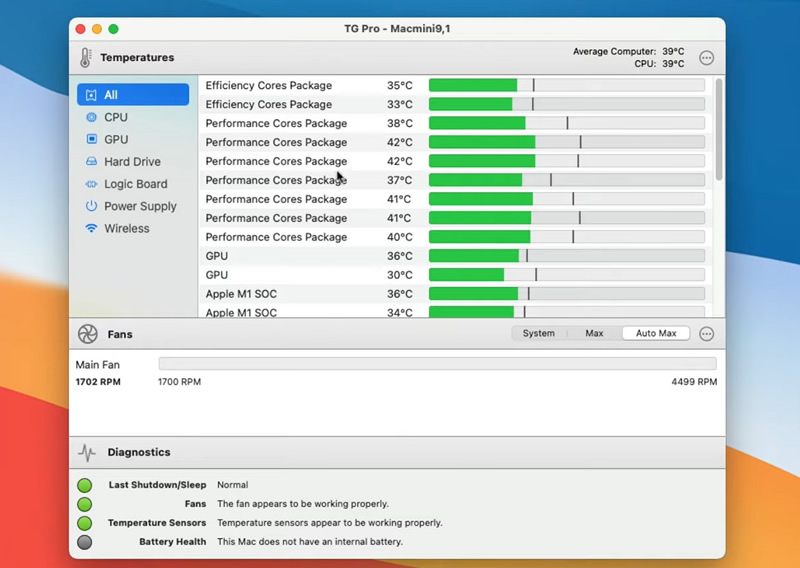 The tool’s main interface contains everything you need, from the temperature information to the fan control option. A quick look at the left end will land you on a series of options clicking on, which expands to more details. Overall, you can grab at least the fundamental information without navigating much from the home screen.

There is no denying that the built-in diagnostic feature of TG Pro is worth appreciating. Talking about my own experience, I was quite amazed when it recorded one of my improper shutdown sessions. To be honest, I’m not that kind of guy who rushes into things, and putting my Mac to sleep is no exception. For that matter of fact, TG Pro listing that one rare session explains how well it is optimized to do its job.

Moreover, the tool is capable of providing a normally functioning fan and sensor diagnostics. Its ability to create new logs for varied administrators is indeed a promising approach to regularizing the tasks.

Among the many amazing TG Pro features, Auto-Boot is one to fall in love with the most. As the name suggests, turning on the feature will allow the tool to automatically tune up the speed of your Mac’s fan whenever the temperature reaches a certain level. Now I used the term certain because you have the power to set the value as per your requirements. 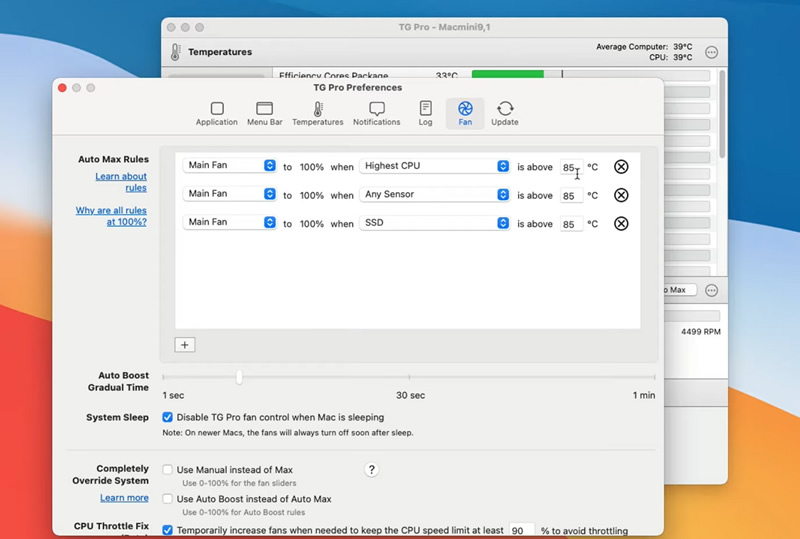 Don’t you think you can use this feature and test how different tools operate based on their intensities? Well, I did the same, especially on those who weren’t working great for me before.

TG Pro is compatible with devices that operate on macOS 10.11 or higher (including macOS 12 Monterey and macOS 13 Ventura), irrespective of its release date. In other words, whether it be the classic Mac from 2008 or the most powerful ones known to date, Apple silicon Mac, M2, M1 Ultra, M1, M1 Pro, and M1 Max, the Temperature Gauge tool is available for you to grab.

Giving you an all-time view of the temperature scene under the hood, is the TG Pro menubar icon in the top-right corner of the screen. A single click allows you to quick switch between System, Max, and Auto Max settings, for times when you need an instant cooling boost. 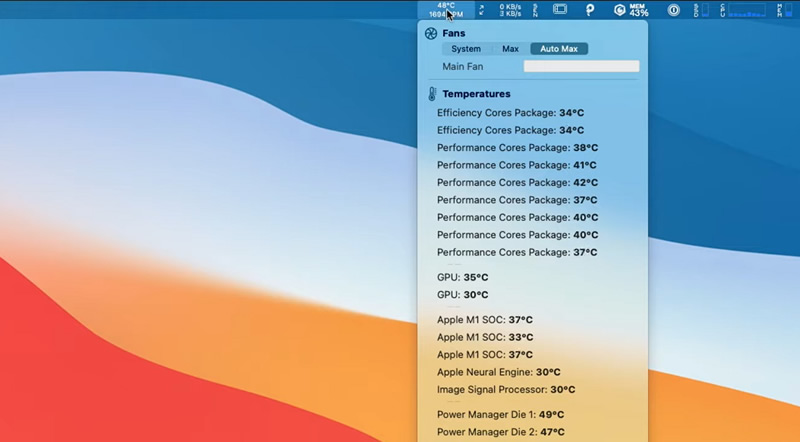 Apart from giving you a quick shortcut to the different fan speed control options, you also get a full-view display of temperatures at which the different components are operating.

The information that the tool provides can be overwhelming for new users and some options are placed deep below various windows. Overclocking the fan speed without knowing what you’re doing is quite easy, but in most cases, this won’t cause any damage. When it comes to slowing down the fan speed, there are multiple safeguards in place in the form of warning pop-ups, so there won’t be any critical hardware failure at any point.

Installation issues for some

Although not frequent, a handful of users have reported it over the years, hence we are compelled to mention it. As claimed by users, an attempt to download and install from the official website landed them an error message, but it all fairness, we did not face this issue during our review test. We did notice that the TG app on the App Store is outdated, but you get upgraded to the latest version of TG Pro even if you purchase the older version.

The temperature monitoring tool TG Pro is designed keeping all the security measures in mind. Being notarized by Apple itself, you can trust this tool on any given day. TG Pro uses the Hardened Runtime and offers a specific and unassailable fan control service.

TG Pro does not have a free version but does offer a free trial. The app is usually available for $20, but you can get this tool for 50% off, only $10, thanks to the sale that has been running for days now. The best part is that the developers also throw in the useful Disk Diet clear tool for a bundled price of $11.80, making it a great buy.

TG Pro is compatible with almost any variant of Mac. No matter if you own the brand-new M1 Pro 16-inch MacBook, or you’ve been operating on the 24-inch iMac, you can buy and install TG Pro with no issues whatsoever. But make sure your device runs macOS 10.11 or anything higher.

How does a fan control app improve MacBook performance?

After taking a closer look at the biggest competitor to TG Pro in the fan speed control apps space for Mac, here’s what we found out about Macs Fan Control:

Similar to TG Pro, Macs Fan Control also offers a menubar view with advanced fan speed controls, but the user interface takes a while to get used to. Comparing the two price-wise, the TG Pro costs less ($11.80) compared to the Macs Fan Control ($14.95).

Verdict: is TG Pro worth it?

Thanks to the series of features it packs, the TG Pro is undoubtedly a useful tool for every Mac user, especially whose day-to-day activity rests on the heavier end.

During my early days as a Mac user, I employed several monitoring tools, including Stats, but compared to what TG Pro has to offer, everything about the former ones seemed slender. For me, TG Pro deserves big thumbs not just because of how amazing it is, but because of how promisingly it serves the intent.

The tool is well-optimized in every sphere and does justice to its purpose. From the flexible user interface to efficient temperature monitoring and structured fan control, TG Pro won’t dissatisfy in any aspect. With TG Pro, you can expect to enhance your Mac’s life validity and productivity. Now the pricing is 50% off, considering what it offers, buying one will be a great deal.