Universal Control In macOS Monterey: What Is It, How Does It Work? 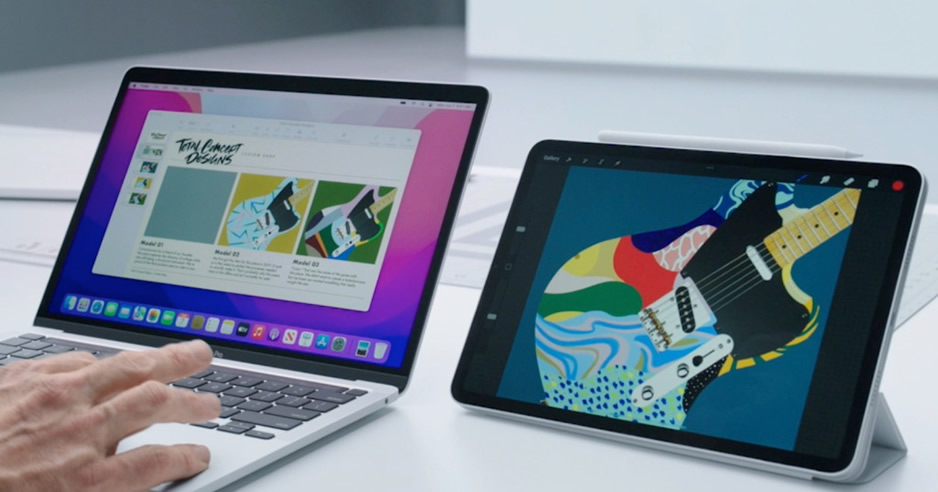 One of the best moments for upcoming tech releases of the year was the Apple WWDC Keynote. It showed a lot of forthcoming updates for iOS and macOS. One such feature that united both the mobile and desktop users was the introduction to the Universal Control feature.

The demo to the upcoming feature looked impressive to steal the spotlight for many users and showed how easy and seamless it is to use. In fact, it requires zero setup and works across a tonne of devices. So, if Universal Control got you intrigued, then you’re at the right place as we’ll be looking at everything it does and how it will make your life a whole lot easier.

What is Universal Control?

So, this will be the first question on your mind. Well, Universal Control is a feature that Apple is working on for years. It builds upon the foundation of Continuity, Handoff and Sidecar features that have long been a part of iOS and macOS. What Universal Control essentially is a seamless experience across all your Apple devices. Whether it be a desktop iMac, MacBook or an iPad, you can seamlessly use a keyboard and mouse without going through the time-consuming process of connecting them with each other or as Apple simply puts it as:

Use a single keyboard, mouse or trackpad to work between your devices. When you move from your Mac to your iPad, the cursor for your mouse or trackpad transforms from an arrow to a round dot, automatically changing shape to the one that is best suited for the device.

Use your mouse or trackpad to drag and drop content between your devices, perfect for when you’re sketching a drawing with Apple Pencil on your iPad and want to drop it into Keynote on your Mac.

How to use Universal Control on Mac?

Universal Control allows you to use your desktop keyboard and mouse combo to control all other desktops and iPads. You just need to place your other iPad or MacBook near your primary desktop and simply slide the mouse cursor over towards the other device. It’s as simple as that, and it should automatically pop up on your secondary device. In fact, you can also drag and drop files over your devices and have easy access to all features, including using your iPad as a touch-enabled drawing or note-taking surface for your Mac. Here are all the benefits that Universal Control provides:

Note: You need your Mac and iPad registered on the same iCloud account to start using the Universal Control feature.

However, if for some reason Universal Control is not working, then follow the step by step instructions below: 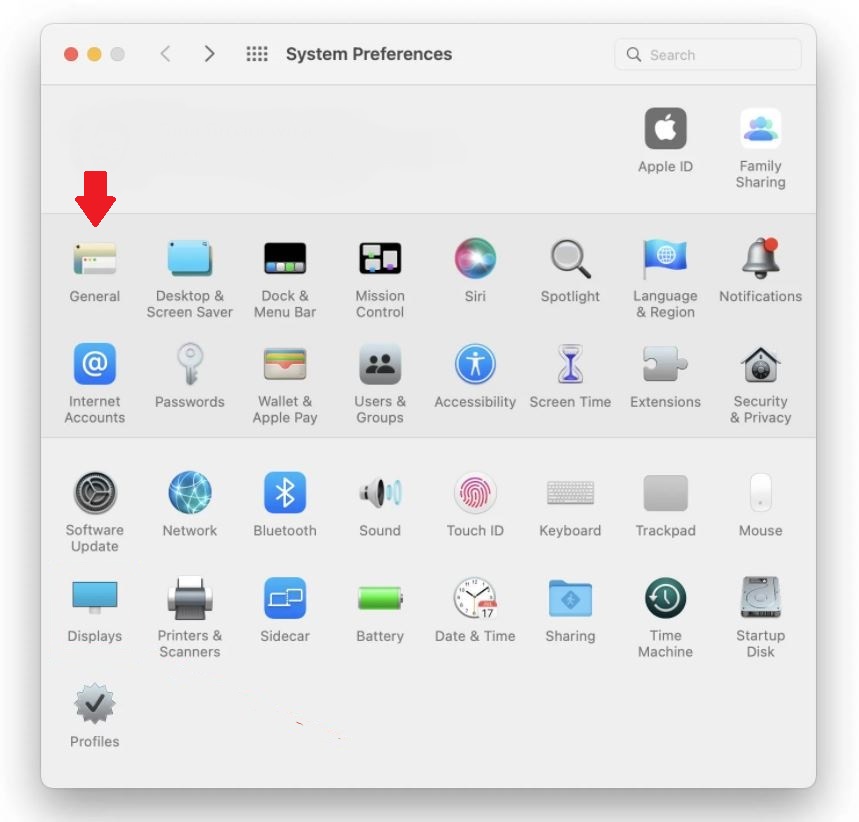 Firstly, you need to click on the “Apple” button present on the top left corner of your Mac home screen and select the “System Preferences” tab and then select the “General” settings as shown above. 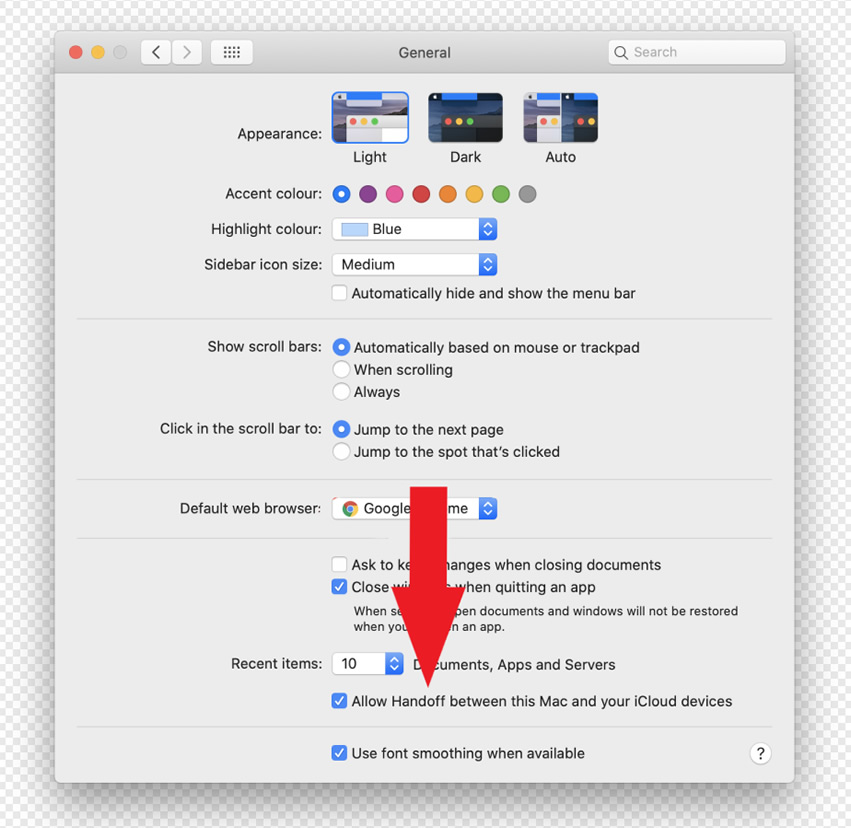 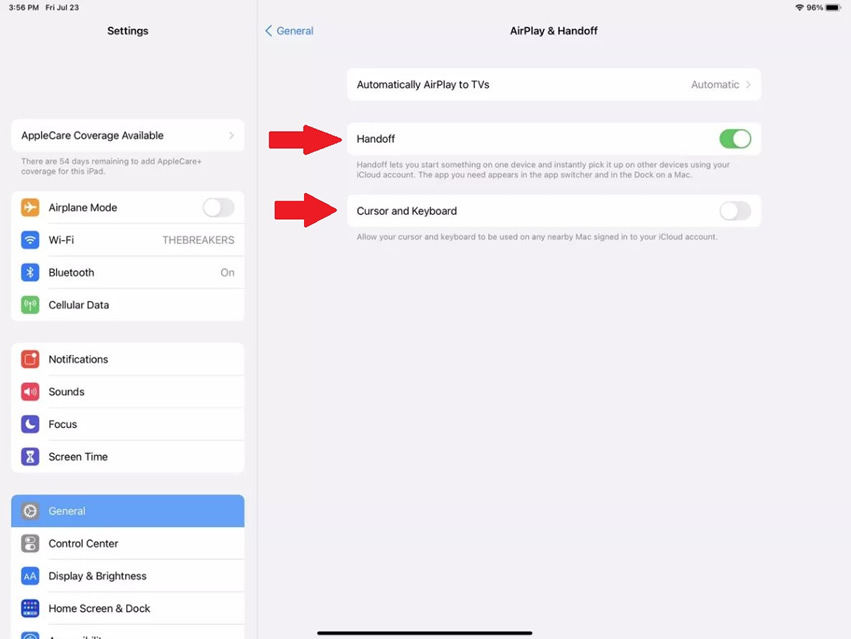 Finally, enable the “Handoff” and the “Cursor and Keyboard” buttons as shown in the screenshot above and bring your iPad closer to your Mac. This will enable “Universal Control”, and everything should proceed smoothly.

Note: Make sure to update your iPad to iPadOS 15 and your Mac to macOS Monterey to get the “Universal Control” feature.

[ Related: How to Upgrade to (and Downgrade from) Monterey ]

How to disable Universal Control on macOS Monterey?

Universal Control is currently not present with the Beta build for macOS Monterey and shouldn’t be a problem for you. However, Apple has the settings built-in, and if for some reason the upcoming build has issues with Universal Control and the overall experience isn’t something that you’re a fan of and need to disable Universal Control for your devices, then you can follow the guide below: 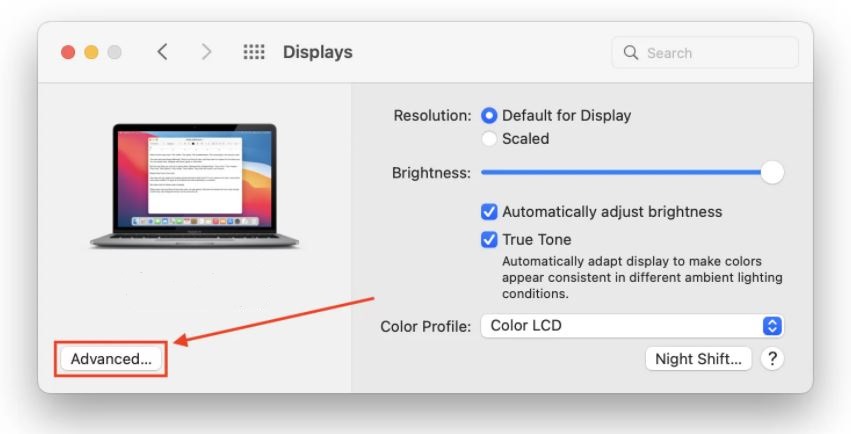 Now, click on the “Advanced…” button on the bottom left corner of the “Display Settings” menu, as shown above in the screenshot.

Why is Universal Control not working on my Mac (and iPad)?

Let’s say that you got your hands on the latest Beta or developer build of macOS Monterey and are eager to use Universal Control. However, you find out that you can’t seem to access the feature, and Universal Control is not working on your Mac or iPad.

What devices will Universal Control work with?

Not all devices would be capable of running the latest and greatest features, and Universal Control is looking to be a lot more limited than the other upcoming features with the stable Monterey update. The list of confirmed devices that Apple states work with Universal Control are the following:

Note: The official listing doesn’t have any support for iPhones. However, you will still be able to connect your iPhones and transfer files quickly, either through a wireless or wired connection.

Do you need Universal Control?

Let’s suppose that your workflow involves a lot of juggling to and from your Mac and iPad, and the whole process can take a lot of time. You might be working on a creative art piece on your iPad while rendering a high-resolution video on your Mac. In such cases, it usually becomes quite irritating to switch devices and follow up on your work quickly.

Well, if that’s the case with you, or you just have a lot of Apple devices and don’t want the hassle of connecting a single keyboard and mouse to all your devices, then Universal Control is for you. It helps you establish a single point of control across all your devices with a keyboard and mouse combo. This way, you can continue to work on your sketch while editing or to render the video on your Mac with ease making it the perfect.

Yes, Universal Control would be present on Intel Macs. A lot of users are still on the old Intel-based devices, and removing a crucial feature of Monterey can result in a lot of backlashes. Hence, you can rest easy that most of the core features would be present on your Intel Macs, with the exception of a select few explicitly built for the M1 devices.

Sidecar is a feature that enables you to use your iPad as a secondary display for your Mac, and from what we have been able to see from the Apple showcase, it leads us to believe that Universal Control will indeed be replacing Sidecar and integrating it with other technologies for a better, more seamless experience with Universal Control across all your devices.

Does universal control work with iPhone?

We have no proper confirmation of the fact that iPhones would be usable with the upcoming Universal Control Feature. Still, in theory, the technology seems to fit perfectly, and it is expected to bring support for iPhones as well. However, even if the final release ends up dropping the support for iPhones, you can rest easy as Apple would definitely bring super-fast connection and access to your Mac and iPhones.

Apple has been known to remove buggy features from their stable updates, and the Universal Control feature missing on the latest Beta or Developer build can be concerning. However, we think that Universal Control is going to be a massive hit with the users and are expecting to see it on the final stable build of macOS Monterey. The overall feature felt seamless and impressive with the first showcase, and we hope that Apple is working on improving it a lot more.

With this, we have reached the end of our blog today. We hope that we might have solved your problems and provided you with the information you needed. Till then, have a great day ahead and enjoy the new upgrades that macOS Monterey will be bringing for your devices.