Windows 11: What Is It? What Are The Changes? 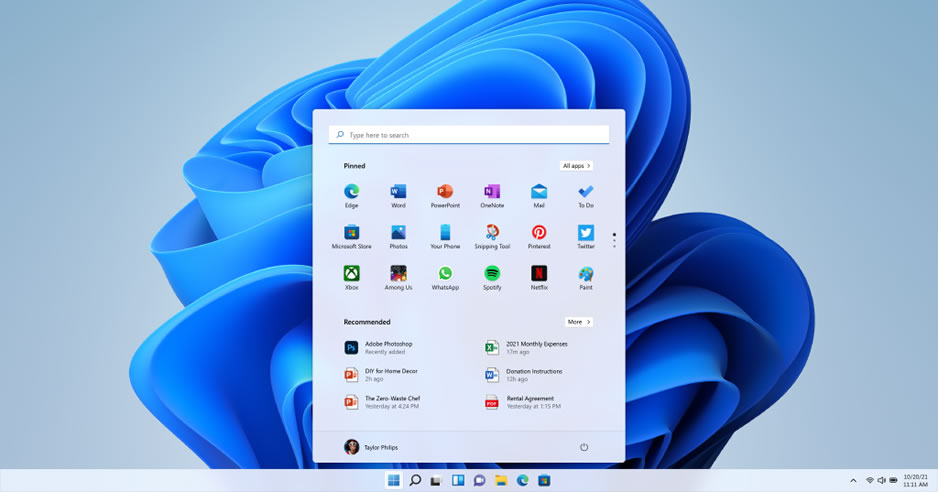 Windows 11 is on the way, with a fresh new design and a bunch of new features aimed at streamlining your PC and helping you be more productive, whether you’re using your laptop or tablet at home or in the office.

Windows 11: the next generation of Windows

During the May 27th Build 2021 keynote, Microsoft CEO Satya Nadella revealed that he has self-hosted the next generation of Windows over the past several months. He also added:

Windows is such an important platform, for connecting people, helping people be as productive as they possibly can be. It is the heart beat right now of what is modern work…

…this is about, how we continue to see where technology can take us versus what it does for us today and where is it that we will be and how can technology be there for you, Windows is the core of that.

We have new features coming – one of the most significant updates to Windows of the past decade to unlock greater economic opportunity for developers and creators.

We’ve known for a while that 2021 would bring a refresh to the Windows design, but it now appears to be bearing fruit as a new version codenamed Cobalt, officially called Windows 11. The interface refresh itself is apparently known as Sun Valley internally at Microsoft. Also we’ve seen reports that Microsoft is working on a new and improved Windows store, the “next generation of Windows” is so much more than an app marketplace.

What are the top new changes in Windows 11?

Windows 11 now feels more clean and uncluttered. The biggest change is the movement of the Start button from the left corner of the task bar to the center, along with icons for open applications and icons that have been pinned to the taskbar. If you must move the Start button back to the left, the option can be found at Settings > Personalization > Taskbar.The colorful tiles that define older versions of Windows have been replaced with glassy, transparent windows that snap together. Office apps now feature rounded corners and are easier to use.

Windows 11 offers a widgets pane designed to display the latest news, weather, your appointments, stock prices and more. Accessible from the Taskbar, the widgets can be customized and personalized to serve up the topics that most interest you. The widget panel is hidden and unobtrusive unless you click on a taskbar button to launch it. Microsoft said they are powered by artificial intelligence and its Edge Web browser to give users a personalised feed.

Both are particularly cool – enabling you to have greater flexibility and choice over how you set up your display with multiple windows. Windows can now be arranged in different ways, while Windows will remember your layouts so you can easily get back to them in future. Windows 11 will also remember how you laid out your windows on an external display and give you access to that layout when you re-dock.

The Microsoft Store is now easier to navigate. The home page displays icons for the different sections, such as apps, gaming and entertainment. You can search across all the categories. A Library icon takes you to your own library where you can see which apps, games, movies and TV shows you’ve download, which ones are available for installation, and which ones can be updated.

If you want to learn more about Windows 11 features, visit the Windows Developer Blog.

According to Microsoft, the minimum system requirements for Windows 11 as follows:

Space issue is the most crucial, though. The 64 GB of storage is a formal requirement but in reality, you’ll need twice as much to prepare the backup. No worries, if you scan your PC with PC cleaning tools, you can free up tens of gigabytes of space by removing junk files and uninstalling applications.

You can also download and run Microsoft’s PC Health Check app to see where you stand.

‘We just made updates to the Windows 11 PC Health Check App. It now provides more detailed info on requirements not met. This should help in cases where folks assumed CPU compat issues were TPM related’.

How to try Windows 11 early

If you’re signed up as a Windows Insider, you should be able to download the Windows 11 preview build. Remember this is a beta version and it is full of bugs.

Download Windows 11 on your PC and install it. You need to ensure you have at least 60 per cent of battery on your laptop while your PC is connected to uninterrupted power supply, and, of course, ensure you meet the hardware specifications.

The brief evolution of Windows versions

Since we now know that Microsoft plans on releasing Windows 11 as a free download for existing Windows 10 users during the 2021 holiday season, it will be fitting to look back at just how far the operating system has come. Here’s a list of the evolution of Windows OS versions.