How to Make Use of the Magic Drop Toolbox: WALTR PRO Review 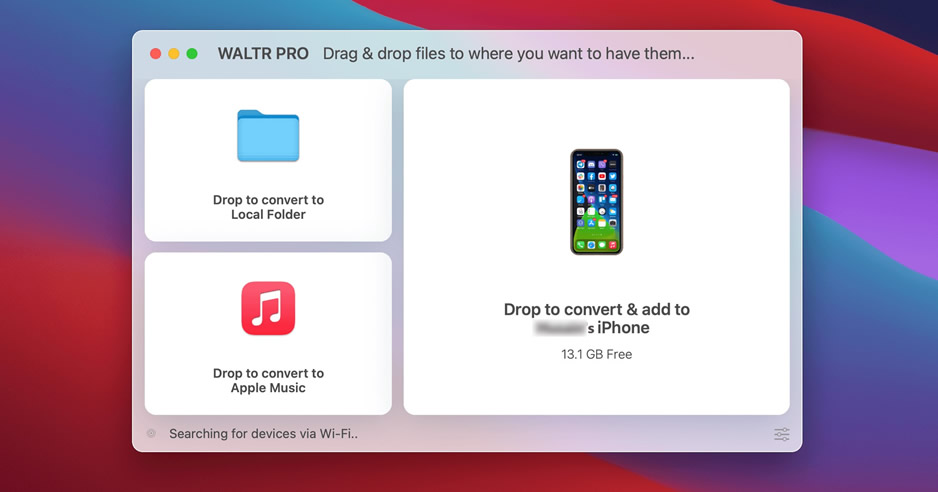 Being an iOS user has taught me that doing simple things like transferring data won’t ever be as easy and convenient as Android devices. With the recent silent announcement of iTunes getting discontinued, it makes it much worse as that’s how transferring data worked with multiple iOS devices. This leads us to a problematic situation that Apple will solve, but how would that turn out? Well, only the future knows.

This doesn’t mean that we don’t have a choice. We most definitely do, and this solution can come in the form of various third-party software. One such software that we’re looking at today is WALTR PRO, and this provides us with a lot of flexibility for getting all the things done. So, let us get to it, shall we?

What is WALTR PRO?

WALTR PRO is iTunes on steroids. It started as a community project back in the day, which turned into WALTR, giving rise to WALTR 2 and now WALTR PRO. It has support for over 36 different file types and lets you kick iTunes to the bucket and even remove the use of wires altogether. It offers seamlessly transferring data with a simple drag and drop interface over WiFi and automatically connects to your iOS device with a companion app for the iPhone.

WALTR PRO is a massive upgrade from the old WALTR 2 and brings many new features plus small perks with a media converter, more control, impressive UI, and much more to experience. According to Softorino CEO Josh Brown:

For the past four years, we’ve been collecting your feedback and learning from our customers’ experience. We didn’t want to make ‘just’ an incremental improvement. We wanted to challenge ourselves and redefine our product approach entirely. And this approach birthed – PRO. Our best product yet.

Here are some new pro-grade features (view features video from the developer here) that we think provided some exciting highlights:

Available for macOS and Windows, WALTR PRO is compatible with the latest iPhone 12 models, as well as iOS 14 and Big Sur. The price for WALTR PRO is starting at $29.95 with an upgrade option from WALTR 2 to PRO at 50% off.

How to make use of this magic ‘DROP’ toolbox?

The transferring process is simple and straightforward. However, you do need a few things to things to be taken care of and without wasting any more time, let us get to it: 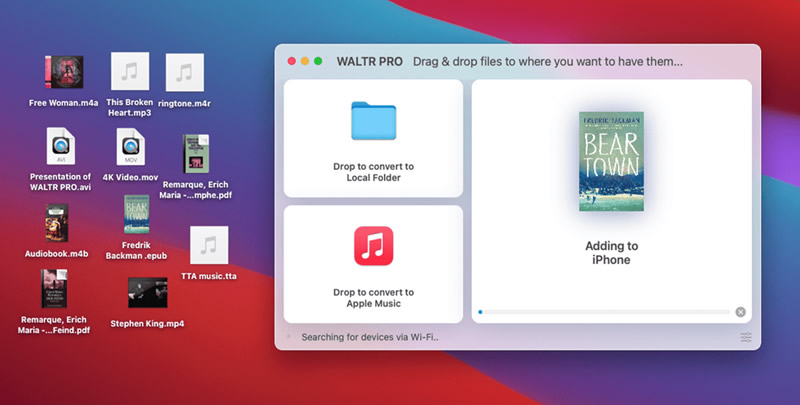 Step 1: Run WALTR PRO and connect to your iPhone or iPad through a wired or wireless connection. Drag and drop all the files you need to be transferred to the iPhone. Don’t worry about the file type, as the intelligent ACR feature detects all your files automatically.

Step 2: We dropped in some MP4, MP3, and AVI files, and they were detected in a second. All incompatible files, such as MKV files, are automatically converted to a supported format such as MP4. This helps save a lot of time and makes the experience seamless. Also, you could hold down the ‘Ctrl’ key on the keyboard and drag and drop the file to access all metadata. 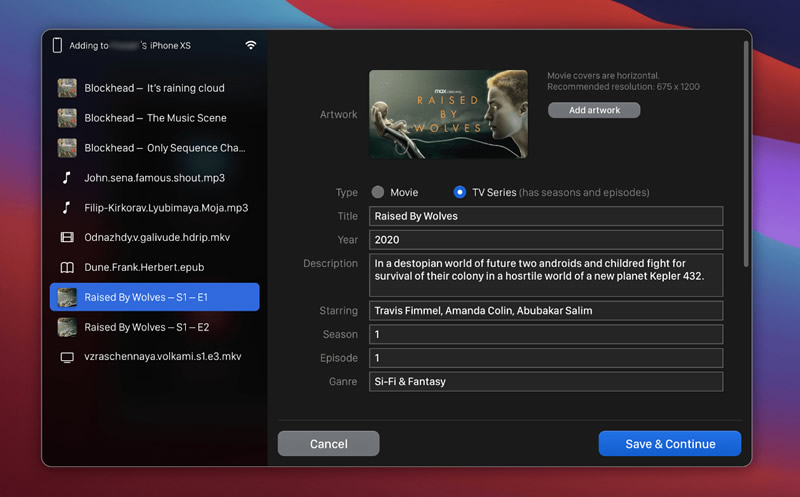 Step 3: The transferring process is straightforward, and after the file is detected and converted, the transmission process begins and can also sync up the files with a WiFi wireless connection. This can be done by enabling the WiFi connectivity option in the settings tab. 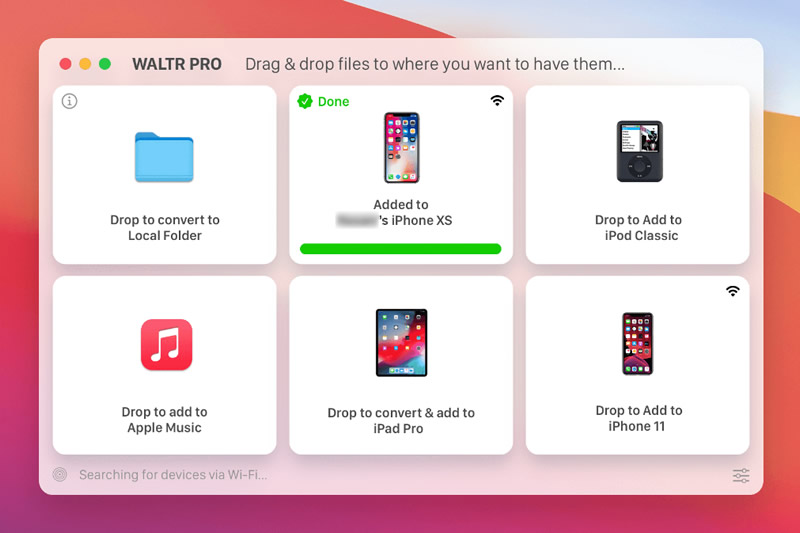 Step 4: As soon as the transfer completes, you can instantly view it on the native iOS TV app, and there’s no need to use or install any other video player.

Note: Besides iPhone and iPad, all legacy iPods from 2010 to 2021 are supported, which shows the dedication the developers of WALTR PRO have put forward. When you connect the classic iPod to your computer, WALTR PRO will instantly detect it, and the iPod will show up on your launch screen. 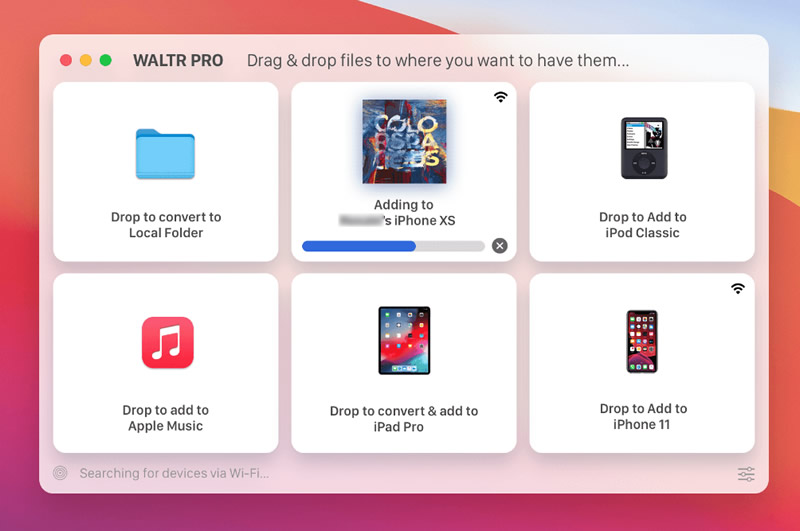 Step 1: Drop all media files on the ‘Drop to convert to Local Folder’ area to start the content recognition and converting process.

Step 2: If the file is not compatible with MKV, the files would be converted to MP4. Let the files be recognized and start the converting process by selecting the storage location. No buttons. No unnecessary settings to worry about, just a simple drag and drop interface.

Step 3: Wait for the conversion process to be completed and then check the converted folder. 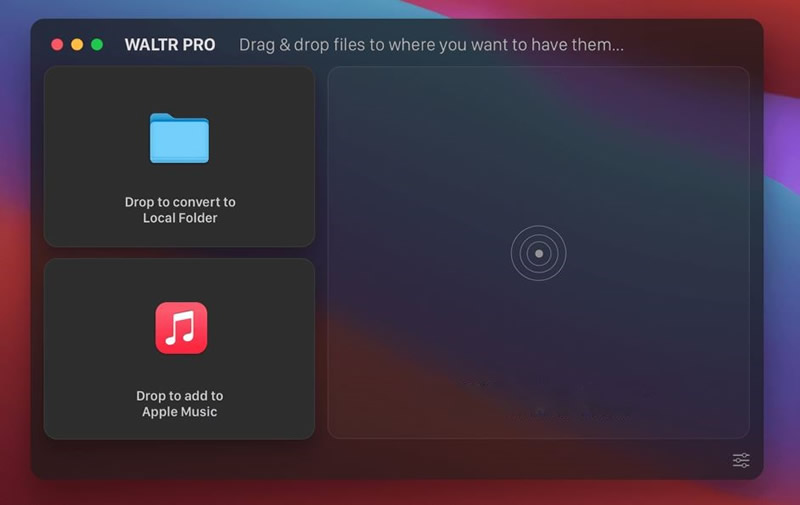 Step 1: Drag and Drop files on the ‘Drop to add to Apple Music’ area.

Step 2: Let the files sync up to your Apple Music or your HomePod through a physical or a WiFi connection. You could also use this to add music for streaming on your HomePod. With iCloud enabled, your music will be backed up and ready to play at a moment’s notice.

Note: All FLAC files are converted for Apple Music support and are the best option for audiophiles. The conversion results in no data being lost and allows you to stream FLAC through the HomePod and HomePod mini. 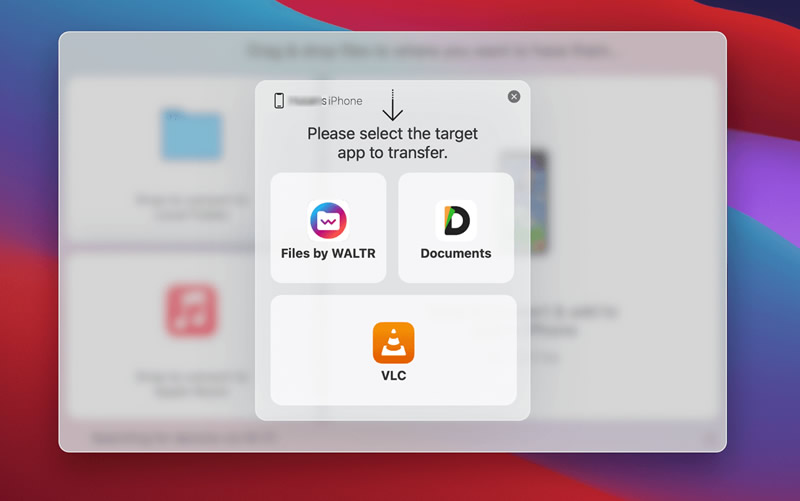 WALTR PRO supports third-party apps to transfer your files to. All files are supported, such as Word documents and high-resolution pictures. Some of the most useful of those apps are Files by WALTR, Documents, and VLC. You could convert and transfer files from your PC or Mac directly to your iPhone’s app storage location with a single click.

Step 1: Follow the same steps from the default transfer method.

Step 2: However, while on the final screen, hold down the ‘Alt’ key on the keyboard and drop the files to select the third-party target app.

Step 3: Let the transfer be completed and find the file in the specified app of choice.

In Short: We would recommend WALTR PRO to everyone that needs an iTunes replacement, but if you’re looking for free software that can do everything that iTunes does, well, look somewhere else.

iTunes is a device management tool developed by Apple for all their iOS devices, and if you have ever owned an iPhone or an iPad, you must have already know what iTunes is.  However, with that, you must even know all the issues that iTunes bring with it, and with the recent developer notes, Apple is silently killing off iTunes, which leaves many users with problems. iTunes has many issues with transferring files as it can compress and reduce the file size by reducing your files quality. This is problematic if you like keeping all your files in the highest quality possible. With that said, let us take a look at some decent features that iTunes provide:

Now, let us see how WALTR PRO solves all the issues that iTunes brings to the table. Living with iTunes requires having a combination of software such as VLC, Handbrake, Playxtreme, FLAC player, or more to get all your files playable and ready for your iOS devices. However, WALTR PRO brings all these features together on a central hub that can transfer, manage and play all your media files. It also supports file formats such as PDF and other readable arrangements for transferring all ebooks from your desktops to your mobile handset. Let us look at all the benefits that you will have while using WALTR PRO:

In Short: WALTR PRO is a fantastic piece of software that can be the only software you will ever need, and it also solves all the problems that iTunes brings with it.

With the imminent release of WALTR PRO, we could quickly expect it to beat WALTR 2, but as of now, WALTR 2 is your best bet. Let’s look at what WALTR PRO improves on from the previous generation. All the improvements are listed below: 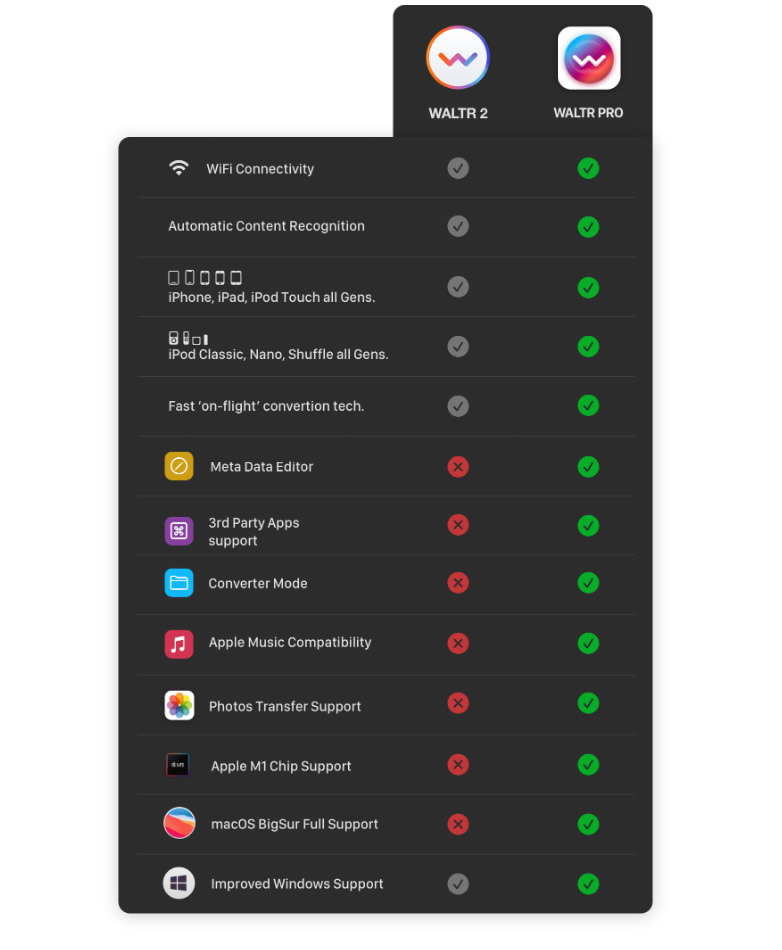 These improvements and the new UI make WALTR PRO miles ahead of its predecessors. Hence, It is highly recommended as iTunes is getting rolled out, and WALTR PRO can be your single hub for file transfers and conversions.

Q: Can I transfer files over WiFi?

Yes, WiFi transfers are possible, and you can connect your iPhone with WALTR PRO by downloading the app and being on the same network. WALTR PRO will automatically scan for your device and send a connection request, and as soon as you grant the connection request, the iPhone would be connected to the PC allowing you to transfer all of your files.

Q: Is WALTR PRO Safe to Use?

Yes, WALTR PRO is entirely safe to use and doesn’t bring any problems with it. The installation is fast and secure and works on both Windows and Macs. We tried all the features and triple-checked it for viruses or malware and ended up with nothing, which shows that WALTR PRO was built with security and privacy in mind.

Yes, all files you transfer through WALTR PRO are transferred to your iPhone without any data loss. All the conversions are also lossless, so you can quickly move all FLAC flies, which turns into ALAC on the fly and keeps 100% of the quality. Similarly, MKV files turn into M4V format on the fly with zero loss in quality. This helps you save a lot of time and also helps retain all the original quality.

Q: Are HEIC and ProRAW files supported with WALTR PRO?

Yes, HEIC and ProRAW files are supported and can be transferred to your iPhone or iPad without any issues or problems with loss in quality. However, as these files can occupy ample storage space due to the lossless nature, we suggest using a wired connection as it is much faster than wireless transfers and would save you a lot of valuable time.

Yes, and No, WALTR PRO is expected to release with a trial version which would be limited on the amount of files you can transfer but even after the trial ends, the feature to transfer files to 3rd party apps will work without any restrictions. It’s free forever.

With iTunes on the verge of demise, the market for similar data transfer and device management tools is rising. One such ‘drop’ tool that we have tested today is WALTR PRO and impressed with the attention to detail and the software’s general performance, and we can easily recommend this to all users.

However, if you’re on a budget, we would still advise you to stick with iTunes as it is a much better alternative that is free and readily available. But iTunes comes with its caveats, and if you need a solution that is a central hub to your iOS device that can also function as the primary data transfer tool, then WALTR PRO is an excellent option to look forward to. With this said and done, we hope that we could have provided a perfect solution so that you can go ahead and transfer and convert all your data.